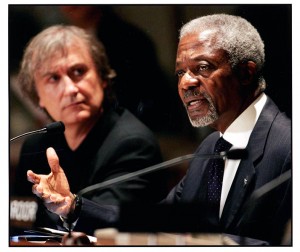 “Cartoons make us laugh. Without them, our lives would be much sadder.

But they are no laughing matter : They have the power to inform, and also to offend.”

Cartooning for Peace is an international network of committed press cartoonists, who fight with humour for the respect of cultures and freedoms.

Cartooning for Peace is an organization founded after an event and a meeting. The bloody reactions to the publication of the Mohamed cartoons in Danish newspaper, Jyllands-Posten on September 30, 2005 led to the founding meeting of twelve international cartoonists on October 16, 2006, gathered together by Kofi Annan, Nobel Peace Prize and United Nations Secretary General and editorial cartoonist Plantu, from French newspaper Le Monde, for a seminar on “Unlearning Intolerance”.

Cartooning for Peace defends fundamental freedoms and democracy. Our organisation is particularly eager to exert freedom of expression as it is defined in article 19 of the Universal Declaration of Human Rights: “Everyone has the right to freedom of opinion and expression; this right includes freedom to hold opinions without interference and to seek, receive and impart information and ideas through any media and regardless of frontiers”.

Cartooning for Peace is attached to the respect for pluralism of cultures and opinions. In the events we organize, exhibitions, publications and international meetings, we are mindful to show the diversity of cartoonists’ perspectives on a given subject.

Cartooning for Peace fights against prejudice and intellectual conformism. Towards extremism, we denounce the excesses, we mock the false certainties, counteract odium and strive to dismount impostures.

Cartooning for Peace is respectful in disrespect. We do not seek to humiliate the beliefs and opinions. We circumvent interdicts with humour.

Cartooning for Peace takes into account the risk that a cartoon published on the Web can appear out of context, within seconds, in every corner of the globe. Our organization is vigilant to prevent press cartoon from becoming an aggravating factor of conflicts.

Cartooning for Peace offers editorial content. Convinced that cartoonists often foretell acutely before everyone, the stirrings of society which will make news tomorrow, we strive to bring forward debates that our societies are not even yet aware of.

Cartooning for Peace allows cartoonists to interact with each other and to confront their different ideological opinions. Our network provides visibility and support for those who are unable to work freely or whose freedom is threatened.

Cartooning for Peace uses the educational value of press cartoon to denounce intolerances. Our organization gives young people a voice and raises their awareness on major societal problems.

Cartooning for Peace brings press cartoon closer to the public. We organize meetings between cartoonists and the public, and set up thematic exhibitions showing a critical look of society. We also publish press cartoons, in paper or digital form.

Cartooning for Peace is a tool serving freedom of expression: a forum and a meeting place for all those who challenge intolerance and all forms of dogmatism.

– Cartooning for Peace in a few significant dates –

1991 – 1992 – Plantu meets Yasser Arafat in 1991 and Shimon Pérès in 1992, and makes them successively sign the same cartoon. For the first time, the signatures from both sides appear on the same document, one year before the Oslo agreements. The meeting is filmed and the video receives the Rare Document Prize at the Festival of the Scoop of Angers. The Reuters agency defines the meeting as “Cartoons’s diplomacy”.

2005 – The case of the cartoons depicting the prophet Mohammed: one part of the world heats up after the publication of 12 drawings from Danish cartoonists, depicting Mohammed, in the Danish newspaper, Jyllands-Posten. Fifty people die in the riots in Pakistan, and eleven in Libya.

2006 – On October 16th, 2016, at the UN headquarters in New York, Kofi Annan (the then UN secretary-general) and Plantu set up a seminar called “Unlearning intolerance”. Twelve famous international editorial cartoonists meet to think about the editorial responsibility of published cartoons. The first exhibition “Cartooning for Peace” is born there.

2007 – 2nd Cartooning for Peace exhibition at the Palais des Nations in Geneva, and then at the Ministry of Culture in Paris, Rome and Atlanta.

2008 – First meeting of editorial cartoonists and exhibition in Israel and Palestine (Jerusalem, Ramallah and Bethlehem). It’s once again the occasion to generate dialogue between Palestinian and Israeli cartoonists.

2010 – Cartooning for Peace and the Caen Memorial launch the first permanent exhibition of the association thanks to the support of the Mutuelle Générale de l’Education Nationale (MGEN). The book “Foutez-nous la paix” (“Leave us alone”, Editions Beaux-Arts) is published for the occasion.

In the same year, Cartooning for Peace presents its first exhibition in Latin America, in Bogota.

2011 – The Cartooning for Peace Swiss Foundation holds its first exhibition on the shores of Lake Geneva and creates the International Editorial Cartoon Award presented by Kofi Annan.

2012 – Cartooning for Peace creates the first International Editorial Cartoons Festival in Montpellier, in partnership with the General Council of Hérault and the Montpellier Press Club.

2014 – Radu Mihaileanu and Stéphanie Valloatto direct the movie “Cartoonists – Footsoldiers of Democracy” about twelve cartoonists from Cartooning for Peace. The film is presented at the Cannes Film Festival 2014, in the presence of the twelve protagonists and the Cartooning for Peace team.

2015 – Attack against the editors of Charlie Hebdo. Among the twelve victims were the editorial cartoonists Wolinski, Charb, Cabu, Tignous and Honoré.

Cartooning for Peace organizes a grand international seminar on press cartoon and freedom of speech: “Press cartoons: a state of affairs”.

On December 15 and 16, with the support of the European Union, Cartooning for Peace gathers 28 cartoonists, each one representing a member State of the EU, for the event “Cartooning for Human rights”, two days of meetings, exhibition and debates inside the European Parliament.

2016 – The opening of “This is not Europe!”, co-produced with the Mons Memorial Museum, took place in Mons on February, with 52 editorial cartoonists from 27 different countries shared drawn opinions on Europe in a major exhibition . For four months, the audience was invited to reflect on their own views of Europe and European identity crisis.

On the occasion of the World Press Freedom Day and the presentation of the 2016 International Editorial Cartoons Prize, an open-air exhibition was displayed along the banks of the Lake Geneva until June 4th, 2016.

Cartooning for Peace and Dinard City Hall present a wide-ranging retrospective “Cartoons for Peace” exhibition. It was curated by the French cartoonist Plantu and Jacques Terrière with almost 200 cartoons from 58 cartoonists.

From November 18th to December 16th, the French Institute in Moscow was presenting the exhibition “Cartooning for Human Rights” at the Contemporary Art Center Winzavod. The project aimed to bring together the work of 28 European about the necessity of protecting human rights.

2017 – The beginning of the program “Draw peace and democracy”, supported by the European Union.  Through education to medias and citizenship of young people, this programme explores in nine countries such as Morocco, Palestine, Israel, Tunisia, Burkina Faso, Ivory Coast, Brazil, Mexico and Canada, the opportunities to promote a peace culture and democracy through press cartoons.

Cartooning for Peace and Editions Gallimard collaborated once again to publish a collection of albums dedicated to editorial cartoons. Each thematic 120-page book is prefaced by an expert and explores a subject of topical interest through sixty editorial cartoons from all over the world. A new one about Emmanuel Macron was released on the 12th of October.

The exhibition “Connecting people – Cartoons for peaceful coexistence” was released with 80 editorial cartoons from all around the world about 6 thematics.

For the 60th anniversary of the Treaty of Rome, Cartooning for Peace and the European Commission shows a new exhibition “Decoding the stars” on the founding fathers of Europe and challenges the continent is now facing.

2018 – While the frigate Hermione is completing its “Libres ensemble” sailing tour in Bordeaux, in partnership with the Organisation Internationale de la Francophonie, Cartooning for Peace is not missing the call and offers the general public to discover its latest pedagogical exhibition “All Migrants !“as well as an exceptional conference within Sud-Ouest newspaper editorial office! The exhibition is also displayed in Germany , in Solingen, at the centre of persecuted arts.

The Programme “Cartooning for Peace and Democracy” programme is launched in Palestine, Mexico and Canada.

In partnership with the Federation Léo Lagrange, Cartooning for Peace offers a new educational kit “Images of Diversity” against racism, anti-Semitism and homophobia.

Cartooning for Peace is pleased to chair the 21st edition of the Histoire de Blois, an event devoted to the power of images.

The association is publishing a new special issue book in the Cartooning for Peace collection published by Gallimard “Les droits de l’Homme, c’est pour quand?”(Human Rights, still some way to go?), with a preface by Christiane Taubira, in partnership with Amnesty International. An exhibition based on the book is being created on the occasion of the 70th anniversary of the Universal Declaration of Human Rights in partnership with the Commissioner for Human Rights of the Council of Europe and the French Ministry of Europe and Foreign Affairs.

2019 – Cartooning for Peace is pleased to present its new exhibition “Ça chauffe pour la planète!” (It’s getting warmer for the planet!) at the FEDA Museum in Andorra la Vella, dealing with the climate emergency.

The association wins the EMI (media and information education) prize at the Tours International Journalism Conference in the out-of-school category for its educational activities with the judicial protection of young people, carried out since January 2018.

Cartooning for Peace participated in the World Press Freedom Conference, organized by UNESCO, the Government of the Federal Democratic Republic of Ethiopia and the African Union, bringing together some 20 press cartoonists from the African continent and abroad for several actions grouped under the “Cartooning in Africa” operation.

The “Cartooning for Peace and Democracy” programme was launched in Israel and Ethiopia for the last year before a restitution time bringing together all the educational and advocacy partners of the programme in November in Strasbourg (France). This event also brought together a number of cartoonists  from all over the world and allows the organisation of a “carte blanche” in the hemicycle of the Council of Europe, on the occasion of the World Democracy Forum in Strasbourg, several exhibitions at the Council of Europe and in the city, as well as educational conferences for pupils from the Bas-Rhin department and students from the Grand-Est region.

Cartooning for Peace expands its collection at Gallimard with three new books: