Cartooning for Peace / FREEDOM OF EXPRESSION UNDER PRESSURE – Turkey

FREEDOM OF EXPRESSION UNDER PRESSURE – Turkey 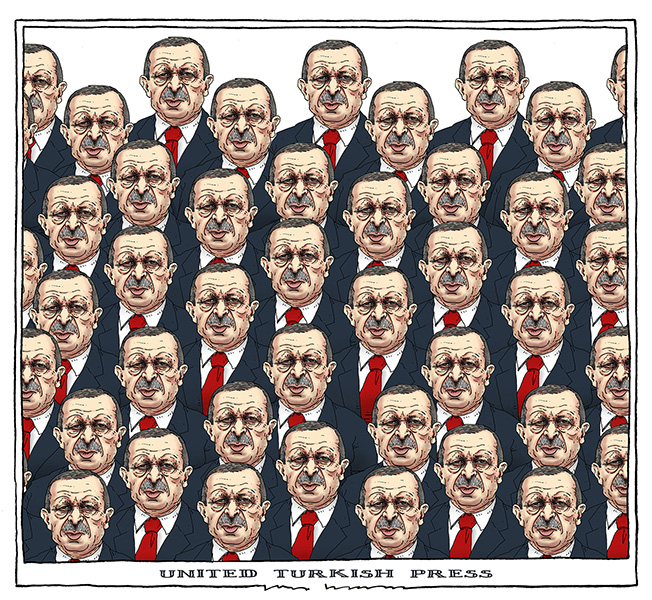 Turkey is facing a general context of deterioration of freedom of speech. The government is adopting repressive laws against medias and pressuring critical journalists.

In October 2015, according to Le Monde « 15 TV channels were seized or forbidden to broadcast by the government, and hundreds of journalists were being sued, accused of « insulting the President » »(read the article –  Marie Jégo, November 15th, 2015).

On November 26th, 2015, Can Dündar, Director of the Cumhuriyet newspaper, and his representative in Ankara, Erdem Gül, were arrested for spying and revealing the delivery of arms to Syrian Islamist groups by the Turkish Secret Services, in May 2014. They have been convicted for « helping a terrorist organization, political and military spying, and the disclosure of informations supposed to stay secret ». Prosecutors required a life imprisonment sentence for both Can Dündar and Erdem Gül.

On February 25, 2016, after 3 months of imprisonment, preventive detention of Can Dündar and Erdem Gül has been declared illegal by the Institutional Court of Turkey: the two journalists should be released soon. Their trial will start on March, 25, they still risk life imprisonment.

Cartooning for Peace follows the evolution of the freedom of speech in Turkey. Cartoonists are also the targets of various pressures. Read the case of Musa Kart, Cumhuriyet’s cartoonist.

On January 22 2016, Brazilian Cartoonist Latuff revealed in an interview for Al Monitor newspaper, that his website wasn’t accessible from Turkey anymore, because of a cartoon very critical of Erdogan.