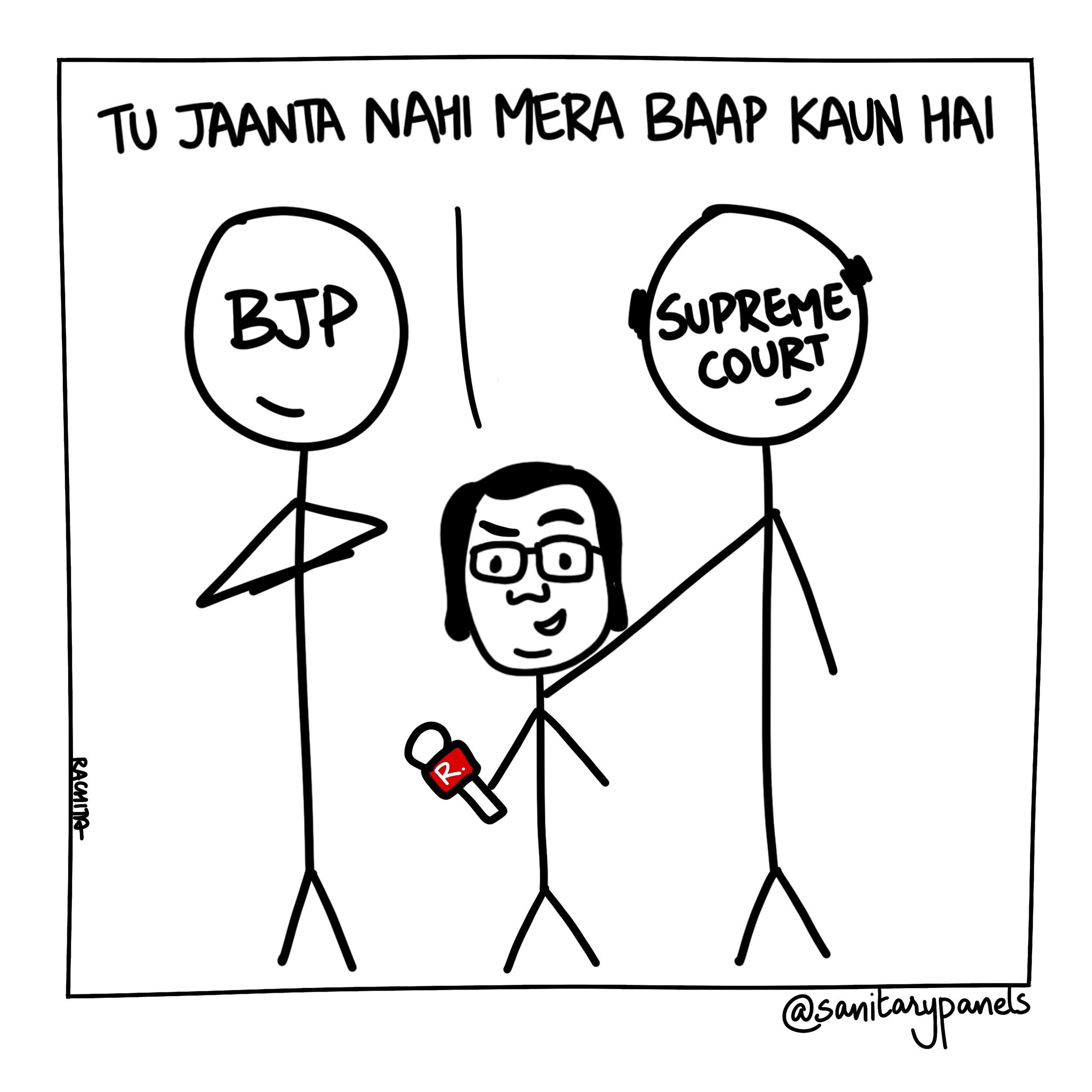 Judgment in the case of Rachita Taneja adjourned for 3 weeks

Following a request by the cartoonist’s lawyer, Mukul Rohatgi, to distinguish the judgment of the case from that of the actor Kunal Kamra, the court granted three weeks of additional time to provide a written defence.

The hearing was an opportunity to recall that the foundations of the Supreme Court are such that it must be able to accept criticism without being in contempt. Agreeing on the soundness of the court’s foundations, the judges nevertheless replied laconically that nowadays “things are going a little too far” .

Rachita Taneja cartoonist to appear next Friday, Cartooning for Peace calls for full withdrawal of charges

On 29 January, the first hearing of the cartoonist Rachita Taneja will take place. She will be represented by her lawyer. Cartooning for Peace reminds that the cartoonist faces six months in prison and a fine (see below) if she is convicted of contempt of court for publishing cartoons on her Twitter account, Sanitary Panels.

Cartooning for Peace reiterates its support for the cartoonist and calls for the complete withdrawal of the charges against her. By commenting on current events in her country, she has simply applied her right to free expression guaranteed by the 1950 constitution, as Daniel Bastard, head of the Asia-Pacific office of Reporters Without Borders (RSF), pointed out.

Cartooning for Peace is alarmed by the persistent use of laws dating back to the colonial era, condemning the production of satirical cartoons for insult or sedition, for example. This week it was cartoonist Zunar from Malaysia who was threatened with prosecution under the Sedition Act. Behind the various formulations, the aim is the same: to criminalise anyone who undermines the honour of a high-ranking political figure, as in the case of Zunar, or an institution, as in the case of Rachita, or national symbols and emblems.

Update 18 December 2020: The Supreme Court is pursuing the complaint against Rachita Taneja

On 18 December 2020, the Supreme Court decided to follow up on the contempt complaint against Rachita Taneja for her cartoons, critical of the same institution. An identical decision was taken regarding the comedian Kunal Kamra.

She was notified of the decision and has 6 weeks to prepare her defence and respond. However, she has been exempted from appearing in court.

According to various Indian Media, “in the notices issued by a bench of Justices Ashok Bhushan, R Subhash Reddy and MR Shah, the top court has asked them to explain why contempt actions should not be taken against them for “scandalising the judiciary”

The cartoonist risks up to 6 months imprisonment and a fine for having made 3 cartoons about court cases. As CPJ reminds us, ” India purportedly values freedom of speech, but contempt proceedings against Rachita Taneja for her cartoons would instead show intolerance for any form of criticism in the country “.

Cartooning for Peace stands by Rachita and hopes that the Supreme Court will be receptive to criticism and will drop charges.

The 17th of December

The petition for criminal contempt action against cartoonist Rachita Taneja considered by the Supreme Court today.

Indian cartoonist Rachita Taneja is targeted by a petition for criminal contempt proceedings following the publication of cartoons on her Twitter account. The petition is being examined by the Supreme Court this 17 December 2020.

On early December 2020, Aditya Kashyap, an international law student and member of the ruling Bharatiya Janata Party (BJP) filed a petition with the Supreme Court, alleging that Rachita Taneja’s cartoons suggest that “the Supreme Court of India has shown bias against the ruling party”. According to various sources, the Attorney General of India, K.K. Venugopal, granted him the right to initiate contempt proceedings .

According to Article 14, Section 2(c) of the Contempt of Court Act, 1971, defines criminal contempt “as any publication that scandalises, lowers or tends to lower the authority of the court”, or “which obstructs the due course of any judicial proceedings or administration of justice”. Under section 15, anyone can launch contempt proceedings after receiving the AG’s consent.

According to the reports cited by the CPJ, the complaint concerns three cartoons published on 7 August, 11 and 12 November 2020 on the artist’s Twitter account, “Sanitary Panels“. One of them represented Prime Minister Narendra Modi in a deal with former Chief Justice Rajan Gogoi, and the other two commented on the lawsuit against journalist Arnab Goswami.

If the petition is admissible, Taneja will be informed of the decision and will be invited to prepare her defense and if found guilty she could face a maximum prison sentence of six months and/or a fine of 2,000 rupees (approximately 22€).

In response, the collective Drawing Resistance, gathering 659 artists, cartoonists and members of the creative community, has issued a statement asking the Supreme Court to drop the proceeding against Taneja. They stated that the Supreme Court should protect the rights of citizens instead of “creating an atmosphere of fear in which anything can be deemed contempt of court.” In their view, this procedure is part of a broader pattern that reveals a desire to censor those who speak out openly.

The stand-up artist, Kunal Kamra, is also the subject of a contempt proceeding initiated by a second law student for tweets posted on his account. The Attorney General has also granted the right to initiate proceedings and the application will be considered Tomorrow, 18 December 2020.

Cartooning for Peace remains suspended from the Supreme Court’s decision and will follow the case closely.