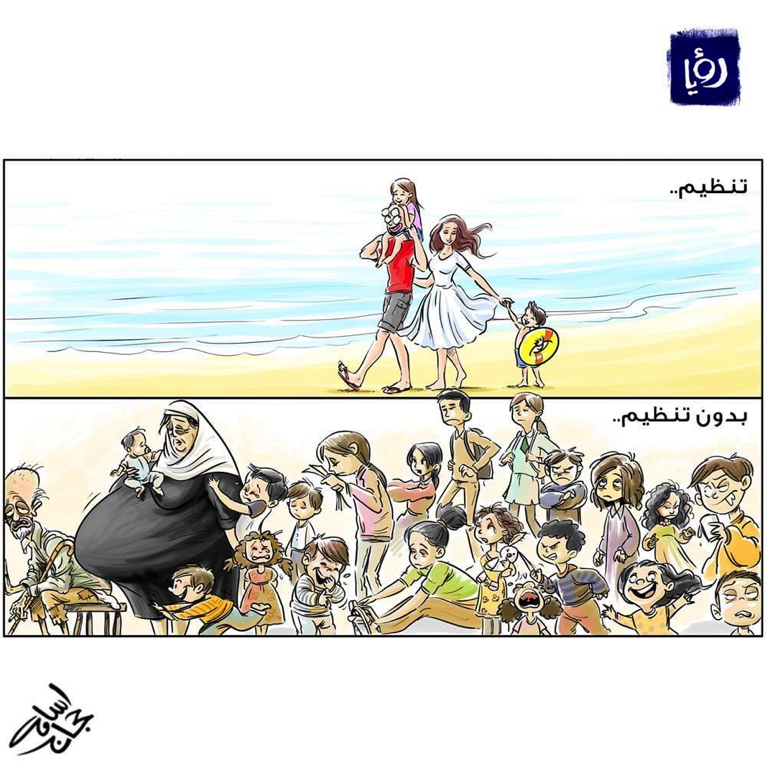 Cartooning for Peace welcomes with joy and relief the court’s verdict, which was handed down at a hearing on 21 November 2021. The Judge recognized that the cartoonist was not guilty of the crime he was accused of. As a reminder, he was prosecuted under Article 150 of the Penal Code and Article 15 of the Cybercrime Act for the front cartoon, which was interpreted by some like an attack against religion.

The Public Prosecutor’s Office may appeal this decision within 60 days after the date of the decision (i.e. 20 January 2022).

CFP is pleased that this verdict recognises the intention expressed by the cartoonist and wishes him to quickly turn the page of this difficult event.

The association recalls that this happy news should not make us forget that at the end of this year, many cartoonists around the world are still being threatened, prosecuted or sentenced to prison for their cartoons.

Osama Hajjaj prosecuted for a cartoon

On 29 June 2021, the Jordanian cartoonist and member of Cartooning for Peace, Osama Hajjaj, appeared in court to enlighten a cartoon about family planning in Jordan.

The cartoon was broadcast by the private television channel Roya TV and then deleted after they and the cartoonist received many negative comments. Taking into account the reactions, the cartoonist immediately explained on his Facebook page that it was a misunderstanding and that his cartoon dealt with birth control from a social perspective and not with religion. He was also notified of a complaint filed by two lawyers which led to legal proceedings under Article 150 of the Penal Code and Article 15 of the Cybercrime Act.

Article (150) of the Penal Code states that: “Any writing or speech aims at or results in stirring sectarian or racial prejudices or the incitement of conflict between different sects or the nation’s elements, such act shall be punished by imprisonment for no less than one year and no more than three years and a fine not to exceed two hundred dinars (200 JD).”

Article (15) of the Cybercrime Act states: “Whoever commits any crime punishable under any applicable legislation by using the information network or any information system or website, or participating in, interfering or inciting to commit it, shall be punished with the penalty stipulated in that legislation.”

Osama Hajjaj, who was accompanied by his lawyer, emerged from the hearing free. He is subject to a travel ban and he is awaiting the verdict of the investigation conducted by the Ministry of Public Affairs, which will determine the possibility of a trial. He faces from one to three years in prison and a fine of JD 200 (EUR 236).

Cartooning for Peace expresses his solidarity with Osama and will be following the investigation. It calls for all charges to be dropped, considering that the cartoonist stated in good faith that he did not want to offend his country’s religion.