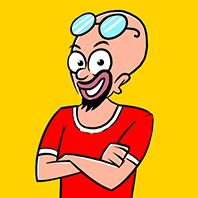 Osama Hajjaj is a Jordanian cartoonist, born in 1973. He works for the Jordanian daily newspaper Alquds. He is well-known in his country and in the Arab world and he also works with European and International websites such as CagleCartoons and CartoonMovement. He is a member of the Association of Jordanian cartoonists.

In the past, he worked for the newspapers Al Mar’a, Al Belad, Al Dustour, Al Ittihad of Abu Dhabi newspapers, and Al Rray, and also for the “Ala Al Hawa Sawa Program” on Jordan TV between 1999 and 2001.

He also participated in different events: a workshop with other cartoonists in 2004 in Egypt, the Annecy animation festival in 2006 in France, the Cartoons Festival in 2008 in Algeria and exhibition such as the exhibition at the Aqaba cartoon gallery in 2011 in Jordan.