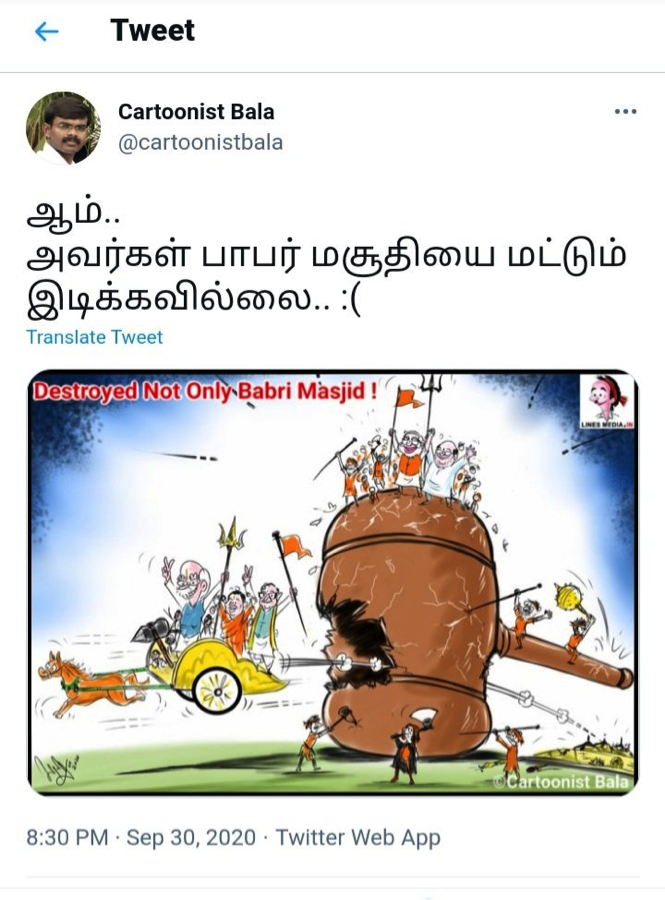 Update 21 June 2021 – Second cartoonist gets notice by Twitter of a legal request by Indian authorities.

Following the case of cartoonist Manjul, cartoonist G Bala, better known as “cartoonist Bala”, was notified by Twitter this 19 June 2021 of a request for legal action by the country’s authorities for “violating laws” for a cartoon published on 30 September 2020. This comes as the UN Special Rapporteurs on 11 June pointed out the non-compliance of India’s recent Information Technology Regulations 2021 with international human rights standards.

The cartoon refers to the 30 September Lucknow Special Court judgement acquitting the leaders of the Bharatiya Janata Party (BJP), the party of the current Prime Minister Narendra Modi, who were accused of being part of the Hindu extremist mob that destroyed the Babri Masjid mosque in 1992.

The email sent by the platform is similar to the one received a few weeks earlier by the cartoonist Manjul, except that for Majul, it was his entire publication that was concerned. Bala reacted on his Twitter account, publishing the email received with the offending cartoon.

The repetition of these cases raises the question of the intention of the authorities. The events happen while, on the 11th of June 2021, UN Special Rapporteurs have written to the Indian government, stating that India’s Information Technology (Intermerdiary Guidelines and Digital Media Ethics Code) Rules, 2021, with which online “intermediaries” must comply, do not conform with international human rights norms in their current forms. The Indian authorities replied to this letter through their Permanent Representation to the United Nations Office in Geneva.

Four days after being notified by Twitter of a request for action against his account by the Indian authorities, cartoonist Manjul was suspended by Network18, a media conglomerate for which he had worked for six years.

According to the media Scroll.in, a lawyer who shared a cartoon by cartoonist Satich Acharya also received an email from the Twitter company informing him of a request from the Indian government.

Like RSF, Cartooning for Peace denounces the censorship faced by the cartoonist Manjul and is concerned about the government’s relentless against cartoonists or people who share cartoons.

On 4 June 2021, Twitter’s legal department notified the cartoonist Manjul by email that “an authorized entity (law enforcement or government agency)” had issued a legal request against his @Manjultoons account claiming that the content posted violated the laws of the country.

In the email (see screenshot below), Twitter informed the cartoonist that no action had been taken in response to the request. Twitter does not point out the institution behind the request, nor the object of the request in its email. As they are unable to provide legal advice, they also suggest to the cartoonist several means to respond, including contacting legal counsel or remove his content if he would. Manjul reacted on his Twitter account by posting a screenshot of the email with the message “Heil Modi government! “. Followed by two more tweets, one of which rightly pointed out that the legal request did not specify which tweet violated the country’s laws. Manjul recently published a series of cartoons criticising the Narendra Modi government’s inaction to face the second surge of Covid-19, which has hit India particularly hard.

This latest attempt by the Indian government to censor a cartoonist demonstrates a worrying narrowing of the democratic space in the country, a few years before the general elections. Moreover, since the publication, many Indian cartoonists expressed their support to the cartoonist and condemned the increasing censorship they face. As, Rachita Taneja, who is still facing legal proceedings for contempt of the Supreme Court.

Cartooning for Peace welcomes Twitter’s step away to inform Manjul and will listen to its response to the request. Note that in April 2021, Twitter censored 52 tweets criticising the Indian government for its handling of the health crisis, according to an investigation by Medianama.