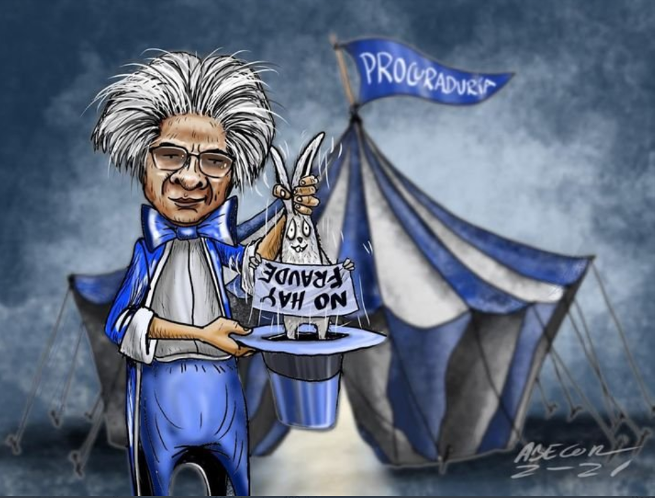 The 22th of October

The Bolivian cartoonist is again subject to anonymous death threats following the publication of a cartoon featuring the attorney Wilfredo Chávez published in the daily Pagina Siete and on social networks. He had already received threats for a drawing in August 2021 featuring the prosecutor of the Republic.

The cartoon published on October 18, 2021, refers to the recount of the votes of the 2019 presidential election conducted last week by the Bolivian Attorney General’s office.

In it, the prosecutor is depicted pulling a rabbit out of a hat displaying a “no fraud” message.

For this cartoon, the cartoonist received numerous death threats that he denounced via his Twitter account, some of which came from the account Facund0c25, the same account that already threatened him for the cartoon below in August 2021.

October 2021: “Your end is near, prepare to go underground Abecor, even without a moustache you will not be able to camouflage yourself”. 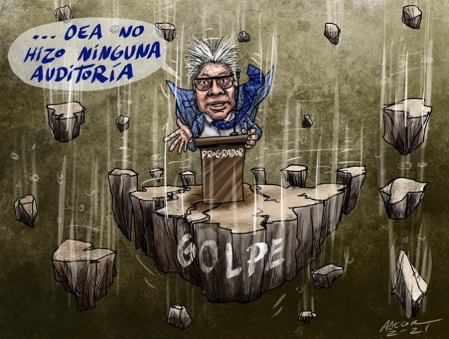 August 2021: “The OEA (Organization of American States, questioning the result of the election) has not made a report.”

August 2021: « You are crazy about the color blue Abecor (color of the political party represented). Focus on something else or you’ll be offered blue flowers when you’ll die. »

Numerous media and organizations supported the cartoonist, including the UNITAS Observatory on Human Rights Defenders, the National Association of Journalists of Bolivia (ANPB) and the Association of Journalists of La Paz (APLP), which denounced the threats as “damaging to the free expression of information ». Like the newspaper Pagina Siete, the Mission in Bolivia of the Office of the United Nations High Commissioner for Human Rights considers that these threats “require clear responses that protect the work of journalists and promote free, independent and pluralistic media.”

In April 2020, CFP reported on the intimidation of Abecor following the publication of one of his cartoons denouncing anti-drug operations in the center of the country. His appeal to the government, as well as his request for protection, were not followed up. The press release also highlighted other cases, such as that of the cartoonist Al-Azar. According to the Reporters Without Borders index, the country now ranks 110th out of 180 in terms of press freedom.

Concerned about the recurrence of cases of censorship or intimidation against cartoonists in the country, Cartooning for Peace also supports the cartoonist and echoes the call for stronger protection of journalistic work in the country.

Press release, Paris, the 20th of May

Bolivia: Threats to freedom of expression

On 7 May, the self-proclaimed Bolivian President, Jeanine Áñez, signed the Supreme Decree 4231 which allows the State to criminally prosecute any person who shares information that could create uncertainty in the population or endanger public health. As indicated by the Committee for the Protection of Journalists (CPJ), this decree modifies the decree of 25 March which “criminalized defiance of the country’s COVID-19 lockdown or spreading misinformation about the coronavirus”. Press cartoonists are concerned about this decision, which opens the door to censorship. They fear the possibility of punishing cartoons critical of the government and its policies. Cartoonist Javier Menchaca, who works for the online newspaper Opinión, said the decree criminalises and endangers free expression and the right to information. On 14 May, the CPJ noted changes to the original text following his objections but called for a comprehensive review to ensure that the text does not restrict press freedom.

In a May 14 statement, the NGO Freedom House joined the Inter-American Commission on Human Rights (IACHR) in denouncing the “clear and imminent risk” this decree poses to freedom of expression in Bolivia.

The signing of this decree comes at a time when freedom of expression and of the press in Bolivia is already under threat. On 2 December 2019, the well-known cartoonist Al-Azar was forced to leave the editorial staff of the newspaper La Razón after receiving numerous threats and insults over several days on social networks. The IACHR called on the state to investigate these attacks on freedom of expression.

More recently, cartoonist Abel Bellido Córdoba (Abecor) received death threats on social networks. He has been criticized for his cartoons about recent political controversies and anti-drug operations in a region that produces much of the country’s cocaine. The cartoonist expressed concern about government inaction.

Like the above-mentioned organizations, Cartooning for Peace is concerned about the threats to freedom of expression in Bolivia and particularly to cartoonists. The association calls for full respect of this fundamental principle enshrined in Article 19 of the Universal Declaration of Human Rights.