Cartooning for Peace / Workshops with Internews in Ivory Coast

Workshops with Internews in Ivory Coast 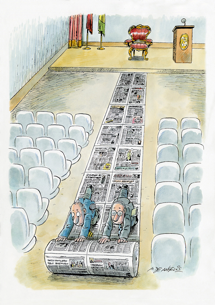 After holding workshops in Abobo to raise awareness of the dangers of fake news and online hate speech, mainly during the election period, Cartooning for Peace, Tache d’Encre and Internews continue their partnership supported by NDI.

In Jacqueville on 21 and 22 August 2020, Tache d’Encre and Internews teams meet with representatives of community radio stations, partners of Internews, for a two-day exchange on conflict-sensitive journalism issues. Representatives from :

These exchanges will be encouraged by the use of press cartoons as a vehicle for debate and will be used by the cartoonists to produce a series of 15 original drawings that will illustrate a charter for conflict-sensitive journalism.