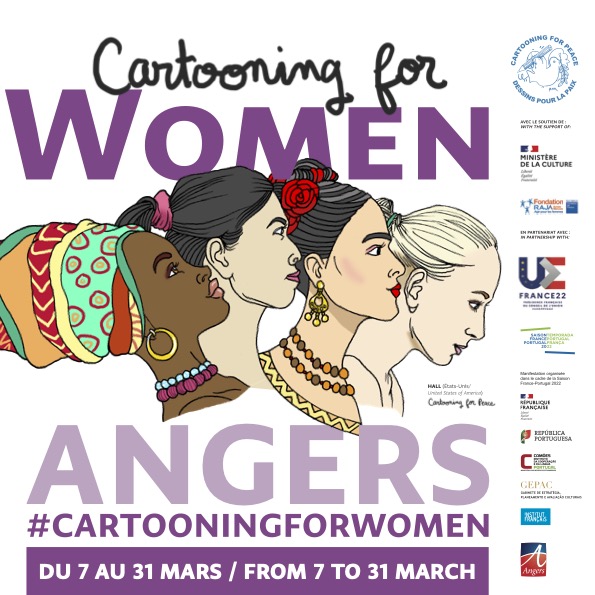 On the occasion of International Women’s Day, Tuesday, March 8, 2022, the Ministry of Culture, the RAJA-Danièle Marcovici Foundation and Cartooning for Peace are joining forces to promote equality in Angers, as part of the French presidency of the European Union, the France-Portugal 2022 Season and the Equality Forum (March 8-10).

On the program of this operation :

In 2017, #MeToo called for sexual harassment victims to uncover and expose the abuse they had suffered. Millions of women from all over the world spoke with one voice since then.

Although our society seems to be engaged in a necessary reflection on women condition and equality between women and men as a goal, respect for women’s rights is still far from being taken for granted, nor secured. Neither in France nor worldwide.

On this occasion, Cartooning for Peace presents its exhibition “Cartooning for Women” from 7 to 31 March. With 30 international (and in particular European) press cartoons, the exhibition looks back at women’s rights after #MeToo. The exhibition condemns injunctions, inequalities and violence against women, shows a plurality of views and supports feminist battles and their decisive issues at stake with humour, impertinence and the powerful strike of press cartoons.

The exhibition is taken from the book “En avant toutes!”of the Cartooning for Peace collection published by Gallimard, in partnership with Amnesty International France, and a preface by Laure Adler.

As part of the Equality Forum and the France-Portugal Season 2022, the press cartoonists Adene (France) and Cristina (Portugal) will sketch live the round table “how to fight against violence and harassment? The example of the media and audiovisual”. The session brings together:

As part of the educational partnership between the Maine-et-Loire departmental council and Cartooning for Peace, female press cartoonists will lead two workshops at the Aubance middle school on the morning of March 8 in order to raise awareness among young people about press cartoons and freedom of expression.

Since 2017, Cartooning for Peace and the department have partnered to offer a civic pathway to middle school students in the department. Thanks to the “Aux dessins collégiens” educational itinerary, students from 5 schools discover and experiment with press cartoons through several stages: the discovery of the “Cartooning for Peace” educational kit, workshops between press cartoonists and middle school students, and a major educational conference.

On Wednesday, March 9, at 9:00 am, Cartooning for Peace members will meet with students from the Art school, l’Atelier.

Cartooning for Peace is proposing a campaign of press cartoons taken from the exhibition. The online campaign will be broadcast on social networks and will raise public awareness of women’s rights and gender equality. The campaign will also be available on a dedicated platform from March 8.