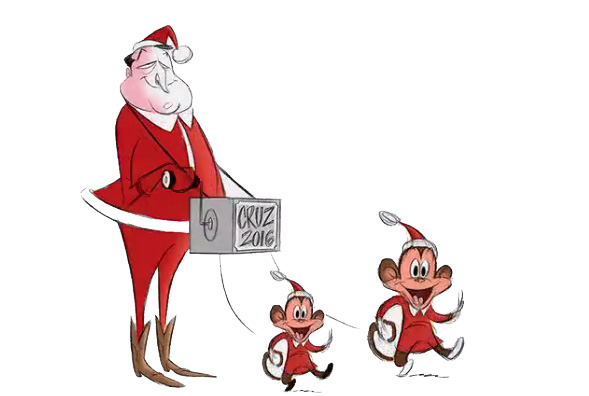 In December 2015, Texas Senator Ted Cruz shared a campaign video, parody of a Christmas story, starring his children. During US elections, family members of the candidates usually remain behind of campaigns, even if they are always associated.
On December 23, Ann Telnaes, cartoonist for the Washington Post, published a GIF representing Ted Cruz as Santa Claus accompanied by two clever monkeys, on the WP website. She immediately received hundreds of emails and insulting messages on social networks. Ted Cruz published then a call to his followers on Twitter to answer in cartoons to Ann Telnaes.

Ann Telnaes received support from the AAEC (The Association of American Editorial Cartoonists) (read the release). Her newspaper, the Washington Post, still decided to take off the GIF from its website. Fred Hiatt, WP’s editor in chief, wrote: “It’s generally been the policy of our editorial section to leave children out of it. I failed to look at this cartoon before it was published. I understand why Ann thought an exception to the policy was warranted in this case, but I do not agree.” (Read the release)