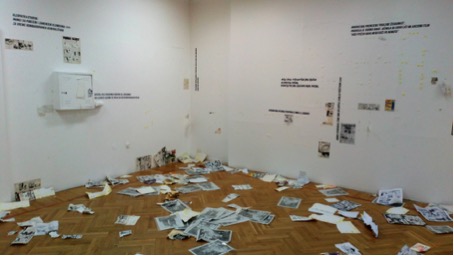 The 17th of November

The MOMCI Cartoonists’ Collective files a complaint against the former Minister of Culture and the Ministry of Interior of the Republic of Serbia.

On 14 October 2020, Reporters Without Borders and Freemuse reported the vandalism of a retrospective exhibition of social and political cartoons produced by the collective of cartoonists MOMCI and exhibited at the Stara Kapetanija Gallery in Zemun.

The day before, the collective had already alerted about death threats against members of the collective, as reported by the two organisations.

In a press release of 15 October 2020, this act of vandalism was condemned by the Ministry of Culture and Information, which however considered that “showing and affirming disgusting and immoral content, wrapped in a cloak of alleged artistic creativity, rightly provokes negative reactions from the majority of the public. “

Following these events, the collective decided to file a complaint targeting the two ministries:

The comic group “MOMCI” filed a criminal complaint against the former Minister of Culture and Information Vladan Vukosavljevic and unidentified persons- the author of the statement of the Ministry of Culture and Information from October 15, 2020, which this institution issued regarding the destruction of the exhibition of underground comic drawings in gallery “Stara kapetanija” in Zemun.

The comic group also filed a complaint against the Ministry of the Interior to the Sector for Internal Control, MIA, since the members of this group informed the police in a timely manner about the threats they received and the danger of the exhibition being attacked. The police did nothing to protect the exhibition space “Stara kapetanija”.

And on 18 October, a demonstration by professionals from the world of art and culture in support of the collective took place in front of the offices of the Union of Artists of Serbia (ULUS).

Cartooning for Peace calls for artistic freedom to be protected and violence to be condemned without exception.