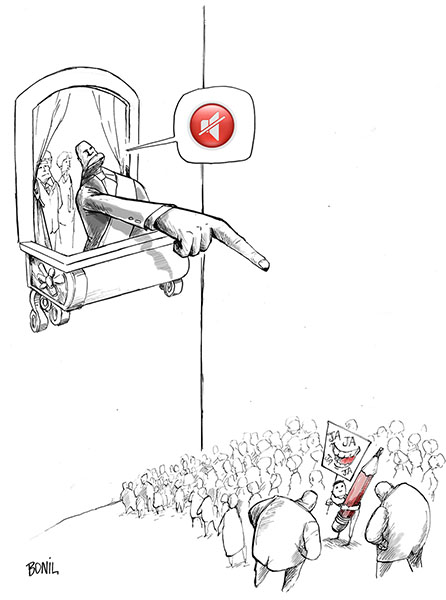 For some years, Cartooning for Peace has closely monitored the various pressures on Ecuadorian cartoonist Bonil, cartoonist for El Universo, one of the biggest Ecuadorian newspapers.

In February 2013, Ecuadorian President Rafael Correa is re-elected for a third term. He promulgated a new law on communication, through the Superintendence of Communication and Information (SuperCom), an authority watching the functioning of the media in Equator. According to Human Rights Watch, “the Correa government continues to subject members of the media to public recrimination. Prosecutors use overly broad counterterrorism and sabotage offences against government critics who engage in public protests.”

In 2014, Bonil has to rectify a cartoon published in December 2013 in El Universo. The cartoon denounced an unjustifiable raid to an opposition representative’s house. Learn more about : “” (CPJ, February , 2014)

In 2015, Bonil has to justify a cartoon to the SuperCom: the cartoon was mocking a government politician. Read: “Ecuadorian Cartoonist Bonil facing charges after mocking politician” (Index On Censorship, February, 9 2015)

On December 28, 2015, Bonil publishes a cartoon about a future law allowing citizens to choose their gender on their national identity card. LGBT Ecuadorian Federation, close to President Correa, registred a complaint to the Supercom. Meanwhile, other LGBT movements and associations were supporting Bonil’s incriminated cartoon.

On 30 January 2016, during national television show, Rafael Correa publicly denounces a new cartoon of Bonil in a video called “The Cantiflada of semana” (“The gibberish of the week”).

Read “The president of Equator wages Reviews another war of words contre cartoonist Bonil” (Journalism in the America, February 2, 2016)