Cartoonist Nime announces his exile to France in comics.

On 15 July 2021, Cartooning for Peace learned that Algerian cartoonist Nime had decided to go into exile in France. The announcement was published on Instagram in the form of excerpts from his comic book in progress, Le Déménagement (The moving).

A “painful” decision, according to the cartoonist, probably explained by the increasing restriction of freedoms in Algeria of which he has been one of the victims: Nime was indeed imprisoned in December 2019 for a series of caricatures of high Algerian dignitaries. As a reminder, Algeria is ranked 146th (out of 180) in the Reporters Without Borders (RSF) World Press Freedom Index.

Cartooning for Peace remains concerned about the shrinking democratic space in Algeria and will make itself available to support the cartoonist as best it can, as it did when he was imprisoned in 2019.

The 26th of November

Cartooning for Peace welcomes the urgency resolution voted on Thursday, November 26 by the European Parliament, highlighting “the deterioration of the human rights situation in Algeria” supported by the case of journalist Khaled Drareni sentenced to two years in prison since September 15. This resolution highlights the state of freedom of expression in the country. As a reminder, the cartoonist artist Nime was arrested in Algeria on November 26, 2019 and sentenced to one year in prison, including three months. Nime was released the 2nd of Jannuary 2020.

According to national television, 76 people imprisoned for their participation in the “Hirak” protest movement have been released – about half of the 140 people detained according to the CNLD, who also refer to a “national instruction from the President of the Republic for the release of hostages in order to try to win (the goodwill of) the street”.

Although released he was summoned to appear before the judge again on the 9th of January 2020. It was the hope of his family that he would be fully acquitted. However, as announced by the CNLD on his Facebook page and confirmed by his family on January 10, the cartoonist remains sentenced to 1 year in prison with a suspended sentence. According to the latter, he has to pay a fine of 20 000 Algerian Dinar and material belonging to members of his company Creature was returned, with the exception of Nime’s one, depriving him of his working tool and archives.

A prejudicial decision that contrasts with the desire for openness displayed on 2 January and impacts the artist’s freedom of expression and creation by keeping him under control.

While welcoming the artist’s release, Cartooning for Peace and Cartoonists Rights Network International reiterate that drawing is not a crime and hope that justice will reverse this decision and complete the process begun on 2 January by acquitting the artist as soon as possible.

They take this opportunity to thank all the cartoonists and partners for their mobilization in support of Nime, a showing of solidarity that touched the artist.

On 11 December 2019 the comic artist, Abdelhamid Amine, alias Nime, was sentenced to 1 year in prison, including 3 months of hard time and 9 months suspended, by the Djamel City Court in Oran.

Arrested on November 26 at the office of the graphic design studio Creature, which he founded, he was placed in pre-trial detention until his hearing on December 5 and the company’s equipment seized by the police. He was finally convicted on 11 December of “insulting the president of the republic and the chief of staff of the army”.

Amine has no previous history of arrest or detention, yet this prosecution comes immediately after the publication of a series of political cartoons between 3 and 14 November 2019 on his blog (see links below for more information). Contacts in Algeria have identified the cartoon entitled “L’Elu”, ”The Chosen One” as the chief article of offence to the state.

Nime’s cartoons depicted various symbols of state power and the candidates in the presidential election of 12 December 2019, eventually won by Abdelmadjid Tebboune, and were in the spirit of Algerian society’s widespread protest movement, hirak, an expression of discontent largely repressed by the ruling power as reported by Amnesty International and Human Rights Watch among others.

He is currently detained in a large dormitory wing of 150 people at the civil prison of Oran. He has no access to writing material or books and the right for one twenty-minute family visit every fourteen days through a window and intercom. The artist’s sentence on December 11 and the conditions of imprisonment are both shocking and worrying, indicative of a muzzling of all forms of expression and reminiscent of the darkest periods in the country’s history. Nevertheless Algerian humour and satire represent a rich heritage that must be preserved.

Cartooning for Peace and Cartoonists Rights Network International condemn this decision and call for the artist’s immediate release. We join in the widespread expression of solidarity with Nime and urge all associations defending freedom of expression and human rights to use their influence in the effort to free Nime. We also call for the community of cartoonists to continue using their art to support Nime and create pieces focused on the injustice occurring in Oran.

Today, the verdict concerning the cartoonist Abdelhamid Amine, alias Nime, has been handed down: according to the CNLD and Creature, who have published communiqués on social networks, he has just been sentenced to one year in prison, including three months in prison by the Oran court.

Benabdelhamid Amine, known as Nime, was convicted and sentenced to one year in prison, including 9 months suspended and 3 months firm.

We will keep you informed of any new information regarding the ongoing case.

Please do not spread false information and rely on Nime’s relatives and family before publishing or posting information about this case.

The Creature team and Nime’s friends and family.

A verdict confirmed by the Amnesty Algeria section.

Cartooning for Peace is concerned about this decision, taken on the eve of the election. It represents a blatant violation of freedom of expression and is part of the recent wave of arrests in recent weeks. Cartooning for Peace hopes for the artist’s imminent release and stands in solidarity with Nime and her family.

New information will be published in the coming days.

According to a press release published on Thursday, December 5 by the company Creature, for which Abdelhamid Amine, alias Nime, works:

“Benabdelhamid Amine, known as Nime, was tried today in the court of Cité Djamel in Oran. The verdict of his trial will be delivered on Wednesday, December 11, 2019. The Creature team and all its family and friends would like to thank all those who supported Nime during this event, directly or indirectly. We are committed to keeping you informed of any progress regarding the ongoing case on this facebook page and hope to see Nime again together very soon.”

According to the artist’s friends and colleagues, an 18-month prison sentence would be required against him for “insulting the State and figures representative of the State” in connection with the series of artworks he made between 3 and 14 November 2019, but as Creature’s statement indicates, the verdict will be handed down on 11 December 2019.

Cartooning for Peace continues to monitor the situation closely and is eagerly awaiting the verdict. 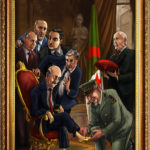 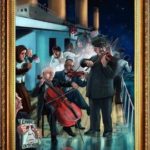 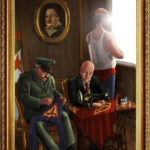 According to the National Committee for the Liberation of Detainees (CNLD), the artist Abdelhamid Amine was arrested on 26 November 2019 at the premises of his advertising agency and his material was seized. He was presented this Thursday, November 28 to the prosecutor of the Djamel City Court of Oran and was placed in pretrial detention. The charges against him will be specified at the hearing on 5 December.

According to the CNLD, his arrest relates to the publication of political cartoons including the below one published on the 3rd of November, entitled “L’élu” (The Elected One) below. Reminding “Cinderella”, it depicts the five candidates to the presidential election planned to take place on the 19th of December and the Chief of Staff Ahmed Gaïd Salah putting on shoes on the foot of Abdelmajid Tebboune, one of the candidates. In the background, we can see the silhouette of the outgoing president, Abdelaziz Bouteflika.