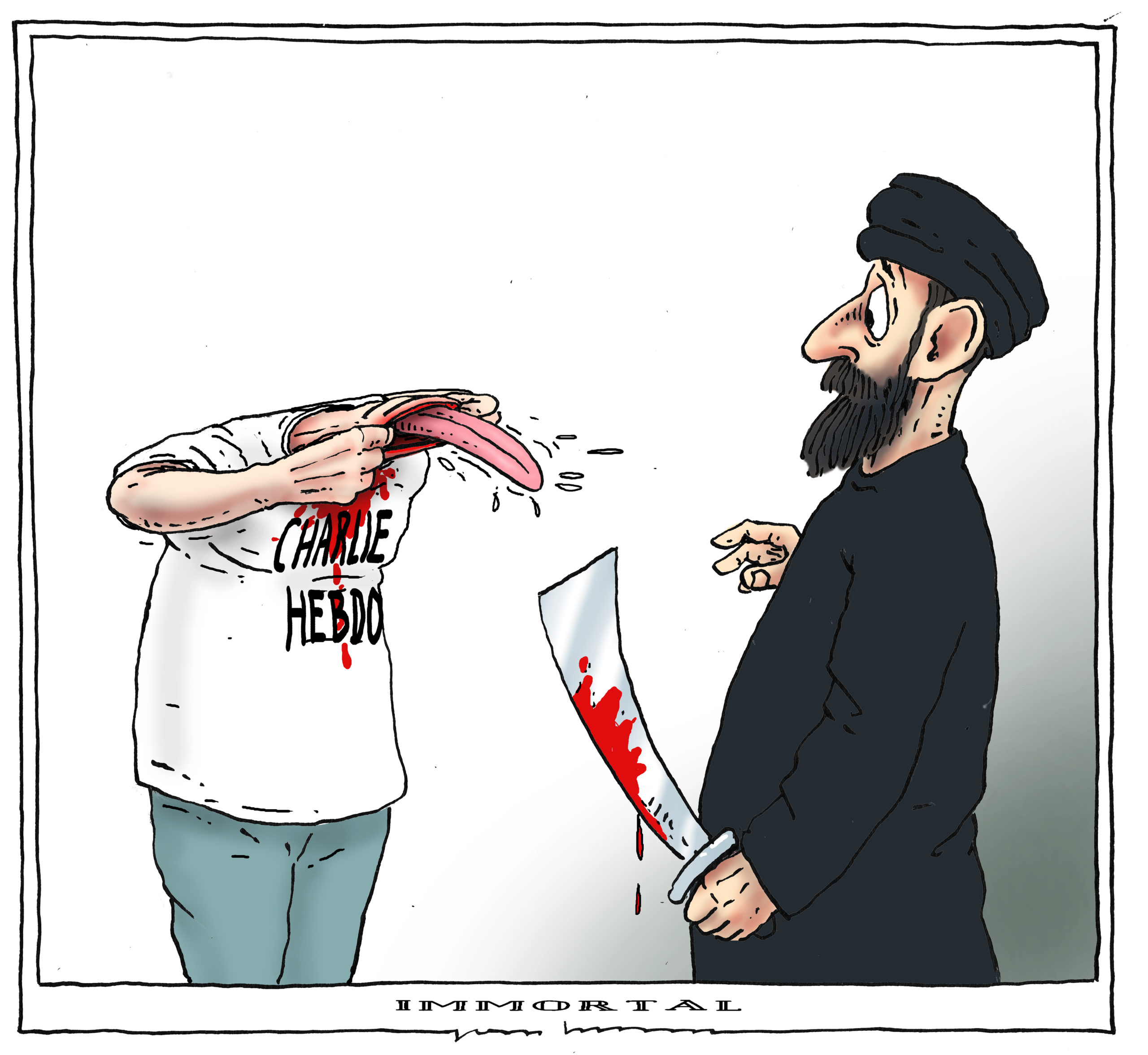 Cartooning for Peace strongly condemns recent cases of threats relating to the use of press cartoons for education or awareness-raising.

While the heinous assassination of Samuel Paty in Conflans-Sainte-Honorine is still on everyone’s mind, teachers in the Netherlands and Canada and a lawyer from India have been threatened for showing press cartoons.

First of all, outrage in the Netherlands, where a teacher at the Emmauscollege in Rotterdam who was paying tribute to Samuel Paty was threatened after pupils said they were offended by a cartoon by cartoonist Joep Bertrams, who has been in the classroom since 2015, which they considered “blasphemous”. A photo of the cartoon was published online and led to the threats being made, which alerted the public prosecutor’s office and the police. An investigation was launched to identify the authors of the threats and the teacher was forced into hiding. Two days later, two cameramen were assaulted by a young from the school while they were filming a report on the teacher’s case.

As the cartoonist rightly reminds us in an interview with the newspaper Troud, the cartoon made in 2015 in homage to the people who died in the attack on Charlie Hebdo’s editorial office does not represent the prophet.

Also in the Netherlands, in Den Bosch, a teacher was threatened online for showing cartoons of the prophet in class. Photographed by pupils with the cartoon in hands, he was then threatened online, forcing the school to contact the police.

A few days earlier in Canada, a teacher in Montreal had been targeted on Twitter by a man who named her and her school after she announced to her students that she was going to show cartoons of the Prophet to debate the issue of freedom of expression as part of her Ethics and Religious Culture class. The case is in the hands of the police.

Not in a school, an Indian lawyer, Deepika Singh Rajawat, has also been threatened for posting a cartoon on Twitter. Aiming to denounce the rape of women in the country, she was deemed blasphemous by Hindu internet users and ignited the web, before a hostile demonstration took place in front of the lawyer’s home.

These events are in addition to the disturbingly long list of cases of online threats that the association has witnessed in recent years.

Cartooning for Peace once again wishes to pay tribute to these men and women who, like Samuel Paty, pay with blind violence for their willingness to raise awareness, debate and teach.

The association reaffirms its permanent commitment to the education of freedom of expression and the promotion of civic debate among the younger generations.