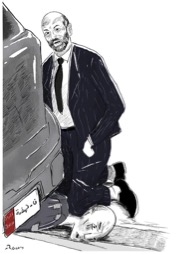 The Jordanian cartoonist Rafat Alkhateeb has been the subject of an online campaign of insults, threats and defamation for a cartoon published on his Facebook page. The cartoon published on 31 May depicts Prime Minister Dr. Omar Razzaz in a pose reminding the one of the officer responsible for George Floyd’s death in the United States.

Following the publication of the cartoon, the cartoonist received numerous messages insulting him, calling him an inflitrated foreign agent, a traitor and calling for justice to prosecute him.

The cartoonist was threatened with prosecution and, on the advice of the The Center For Defending Freedom Of Journalists, was forced to remove the cartoon from his Facebook page.

Cartooning for Peace brings its support to Rafat Alkhateeb and strongly condemns the defamation and intimidation the cartoonist has been subjected to for making the cartoon in object. As the Jordanian Cartoonists Association points out, the freedom to express oneself and to draw is guaranteed by the Law of the Kingdom. It is also enshrined in the Universal Declaration of Human Rights.