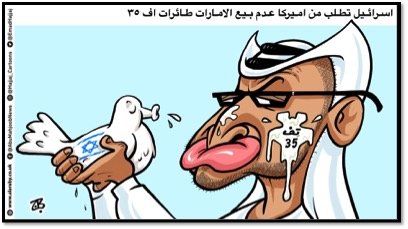 The Criminal Magistrate’s Court of Amman (Jordan) decides to cease the prosecution of cartoonist Emad Hajjaj.

Cartooning for Peace welcomes the court’s decision, taken at a hearing on 23 December 2020, to drop charges against the cartoonist for “contempt of a president of a foreign country against the provisions of 122/1 of the Penal Code” following the publication of the opposite cartoon .

The Public Prosecutor’s Office may appeal against this decision within 60 days of the date of issue of the decision (i.e. 23 December 2020).

CFP welcomes the court’s willingness to uphold the principles of freedom of expression enshrined in the Kingdom of Jordan’s Constitution and wishes the cartoonist a speedy resolution of this difficult event. The association reminds us that this welcome news should not make us forget that, at the beginning of this year, many cartoonists around the world are still subject to threats, prosecutions or prison sentences for cartoons they made.

Emad Hajjaj was released on bail on Sunday 30 August, but remains suspended to the Supreme Court’s decision.

The latter must determine the competent court to judge his case after the State Security Court has dismissed the case.
As a reminder, Emad Hajjaj was arrested on 26 August following a police control on his way back to Amman from a family outing.
Deprived of his liberty and presented the next morning to the General Prosecutor of Amman, he learned hours later that he was being tried for violation of the Law on Cybercrime for the realization of the below cartoon. He will also be questioned about two other cartoons published earlier in 2020. He was charged with libel and slander.
Considering his juridiction incompetent to judge the case, the Public Prosecutor forwarded Emad’s case to the State Security Court where he was accused of violating the provisions of Article 3 / B of the Law on the Prevention of Terrorism and Article 15 of the Law on Cybercrime (3 times for each of the incriminated cartoons). The penalty envisaged is 3 to 20 years of hard labour.
Transferred to Balqa prison to serve a 14-day provisional sentence, he was finally heard on Sunday 30 August, after his lawyer, Mr. Marwan Salem, submitted a request for his release. At the end of the hearing, the court announced that it was not competent to judge the case, releasing the cartoonist on bail until the Supreme Court decides on the competent jurisdiction.
Cartooning for Peace is once again delighted to see the cartoonist free, with his family, as well as the great solidarity of the community of cartoonists, the media, and international organisations defending press freedom and human rights around the world.
The association remains fully committed to its member cartoonist and reiterates its request for the lifting of all charges against the cartoonist.

Cartooning for Peace welcomes the release from prison of cartoonist Emad Hajjaj, which took place this Sunday, August 30, 2020.

The State Security Court, specialized among other things in dealing with high treason and terrorism cases, considered itself incompetent to handle the case and released the cartoonist on bail.

His file was handed over to the General Prosecutor of Amman and the charges against him were also requalified. He now faces between 6 months and 2 years in prison for “slander and libel”.

The schedule of the trial remains unknown and Cartooning for Peace will continue to follow the progress of the case.

Although it is a relief to know the cartoonist free, the association remains mobilized for Emad and demands the complete abandonment of the charges against the cartoonist.

Yesterday, Emad Hajjaj was presented to the General Prosecutor of Amman.
The latter referred his case to the State Security Court where the cartoonist will be presented on Sunday, August 30, 2020. In the meantime, he stays in jail.
The cartoonist faces up to five years in prison. According to some sources, the cartoonist is accused of offending the United Arab Emirates.
As a reminder, the drawing that led to the arrest of Emad Hajjaj depicts the Crown Prince of Abu Dhabi, Mohamed Ben Zayed Al Nahyan, being spat at by a dove flanked by the flag of Israel. The drawing looks back at the recent negotiation of a partnership agreement between the United Arab Emirates and Israel.
Cartooning for Peace maintains its call for the release of the cartoonist and reminds that the freedom to express oneself and to draw is guaranteed by Jordanian law.
Below, cartoons in support of Emad Hajjaj, #FreeEmadHajjaj

Cartooning for Peace joins the solidarity efforts and demands the release of the cartoonist, member of his network and president of the Jordanian Cartoonists’ Association.

The Jordanian cartoonist, Emad Hajjaj, was arrested by the Jordanian authorities after the publication of a cartoon related to the signing of the agreement between Israel and the United Arab Emirates, published by Al Araby and subsequently posted on the artist’s website and social networks. The publication on social networks has since disappeared.

According to Nidal Mansour (screenshot below), head of the Jordanian Center for the Protection and Freedom of Journalists, the cartoonist was arrested for obstructing the Jordanian Information Systems and Cybercrime Law of 2015. An arrest that Emad Hajjaj’s brother, Osama, a cartoonist himself, confirmed. According to Reporters Without Borders, the publications of online newspapers or those of citizen journalists on social networks are punishable by prison sentences and lead to pre-trial detention in case of prosecution under this law. The cartoonist was taken to a court this morning to be heard. 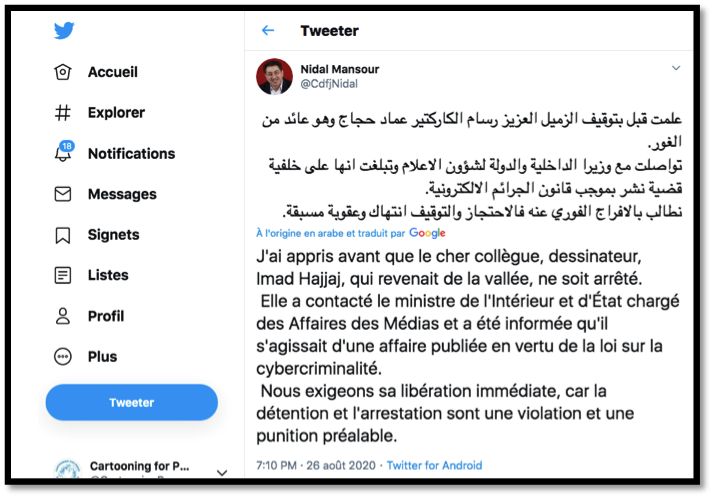 Cartooning for Peace is mobilizing to give its full support to Emad Hajjaj and calls for his immediate release No artist can be arrested for the realization of a cartoon.