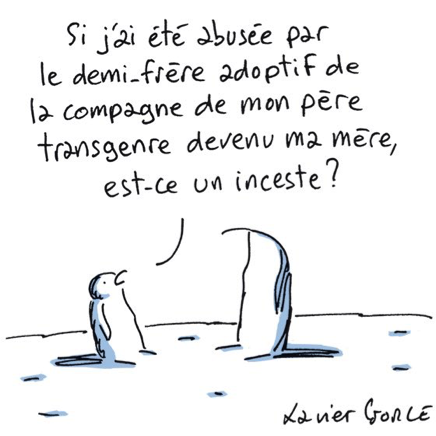 Online controversy, public apology and resignation: The collaboration between the cartoonist and the newspaper Le Monde comes to an end

Currently in discussion with Le Monde to take over from its emblematic cartoonist Plantu, whose retirement after more than 50 years of service was made official this week, Cartooning for Peace learned the sad end of the collaboration between the newspaper and the cartoonist friend of the association Xavier Gorce.

On 19 January 2021, Le Monde published the cartoon by the author of the illustrated series “Les indégivrables” in the newspaper’s morning newsletter. The cartoon refers to a society debate on incest following the publication of the book “La Familia grande”, in which the lawyer Camille Kouchner accuses her stepfather, Olivier Duhamel, of having sexually assaulted his twin when he was a teenager in the late 1980s.

The publication of the cartoon provoked many reactions from the newspapers’ readers and on the social Media, many of them accusing Gorce of transphobia and trivializing incest. Faced with the reactions, the editorial director of Le Monde, Caroline Monnod, apologised to readers who might have been shocked by the publication, presenting the latest as a mistake made by the newspaper.

The next day, the cartoonist published an explanation of his cartoon on his Facebook page. Responding to interviews for other newspapers, he expressed his surprise concerning the newspaper’s decision and worried about the weight of morality and social networks on the media. After sketching his last cartoon for the newspaper on the same day, the cartoonist announced almost immediately that he would “stop working for Le Monde“. The newspaper in turn responded to this decision with an update acknowledging this decision. Several press articles and interviews about the controversy followed since then.

Agreeing, like the two protagonists of the affair, on the fact that there is no question of censorship here (the cartoon is still visible on the newspaper’s website), Cartooning for Peace regrets the consequence of this umpteenth polemic born of virulent reactions to the publication of a cartoon, which in just 48 hours brought to an end a 20-year collaboration between a cartoonist and a newspaper. The situation demonstrates once again the growing pressure that online polemics put on cartoonists and the media that publish them.

And while ironically, the reactions once again prove the primordial role of this mode of expression, which reflects contemporary social debates, the association regrets that the polemic surrounding the nature of the cartoon, the presumed intention and the respective decisions of the author and the newspaper prevail over the fundamental debate the cartoon depicts.

Making the analysis of the press cartoon a pillar of its pedagogical method aimed fighting misunderstandings and intolerance, Cartooning for Peace regrets that the newspaper and the cartoonist were unable to respond to the controversy jointly. An explanation putting the cartoon in perspective would have refocused the debate on the issue it deals with.

The press cartoon is a rich medium of information, awareness-raising and interpellation, which has all too often become hostage to a polarisation of opinions and its authors subject to considerable pressure from public opinion, particularly online. Faced with this growing phenomenon, Cartooning for Peace advocates for more pedagogy and will continue to contribute to the promotion and defence of the discipline. Above all, it will continue to support readers, partners and cartoonist, relying on its educational approach.

And happy to have the opportunity to take over the role of Plantu on the front page of Le Monde newspaper, it will continue to promote the plurality of points of view of its network’s members on the news events.