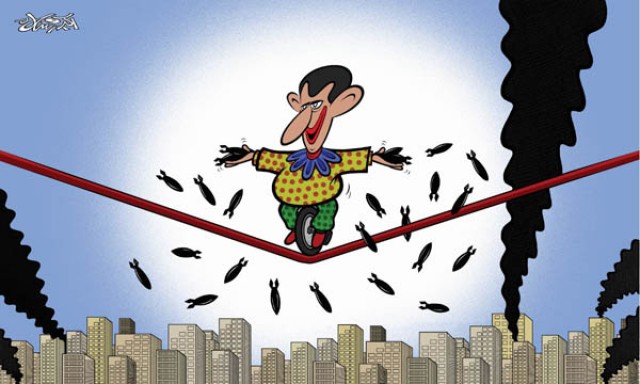 Syrian cartoonist Akram Ralsan was arrested on October, 2 2012 in Hama. In a press release on September 22, Reporters Without Borders reported that Akram Ralsan died in 2013 under torture, few months after being arrested.

According to RWB: “Akram Raslan was at the offices of the government newspaper Al-Fida’a in Hama when military intelligence officers arrested him on 2 October 2012 over a cartoon critical of President Assad.

Ever since the start of the uprising in 2011, he had been publishing pro-opposition cartoons anonymously on Arabic-language news websites (including those of Al-Jarida and Al-Jazeera) as well as on his own blog and on social networks.

The author of more than 300 published cartoons, he became well known for his commitment to the Syrian people and for criticizing the regime’s repressive practices and human rights violations. In 2013, Cartoonists Rights Network International awarded him its Courage in Editorial Cartooning prize.”

In September 2013, various press cartoonists gathered in the International Festival of Saint Just Le Martel, signed a call for the release of Akram Ralsan.