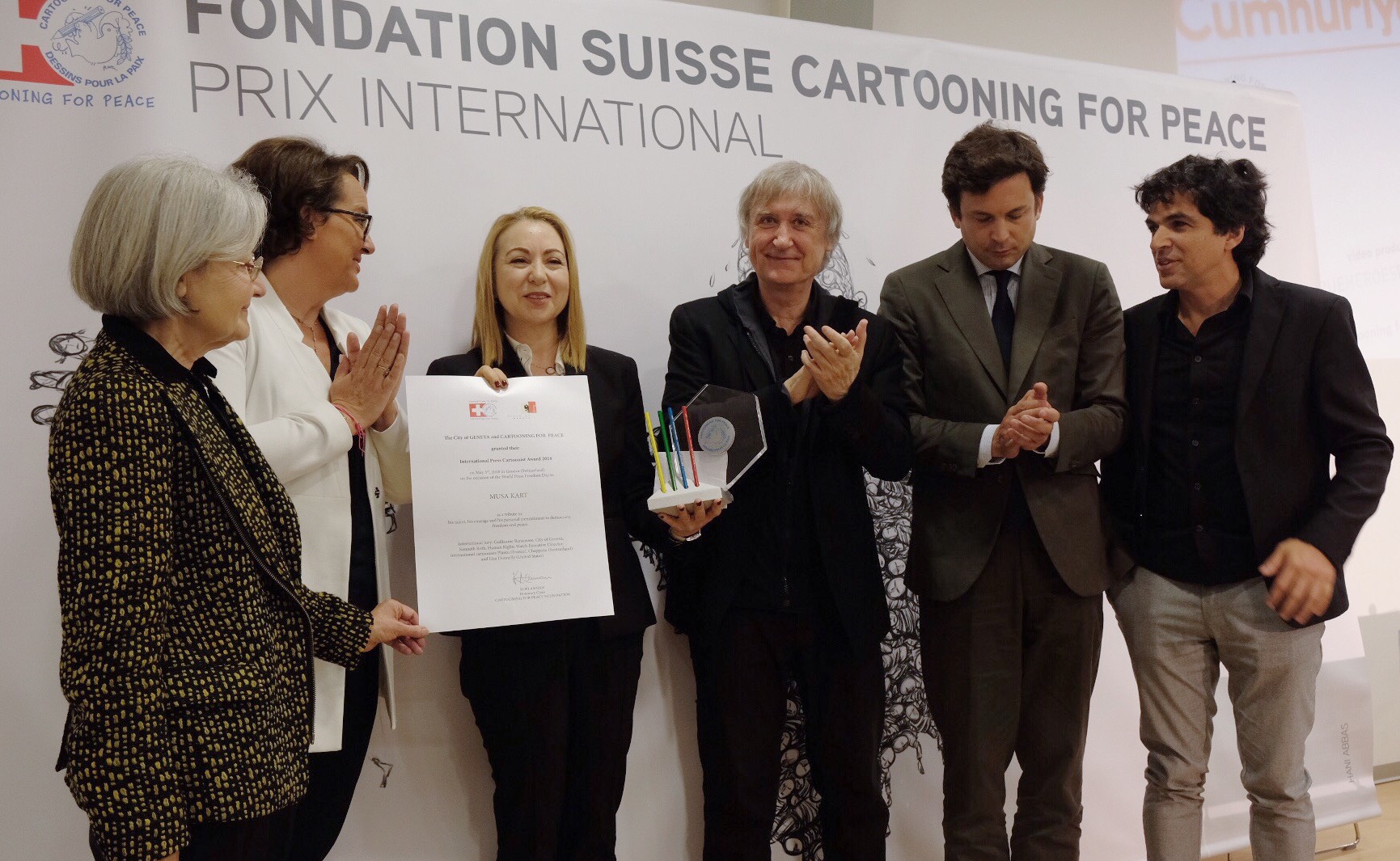 On the occasion of World Press Freedom Day, the Swiss Foundation Cartooning for Peace inaugurates its biennial exhibition in Geneva on 3 May 2018 and awards the fourth edition of its International Press Cartoon Prize to famous Turkish cartoonist, Musa Kart.

The Jury chose Musa Kart, emblematic cartoonist of the Istanbul daily Cumhuriyet for his talent and courage in defending freedom of expression and artistic creation. Musa Kart (64) spent several months in prison after the July 2016 coup attempt against President Erdoğan. Charged with “association with a terrorist organization”, the Silivri court sentenced him to three years and nine months in prison on 26 April 2018. Like 14 of his fellow journalists from Cumhuriyet who were also sentenced to heavy prison terms, he was not imprisoned pending appeal but remains subject to judicial control and a ban on leaving the country.

“In 2012, by creating this International Prize with the City of Geneva, we wanted to salute the talent and courage of sisters and brothers of feather working under skies not very lenient to political satire. What we did not imagine, then, was that the air of freedom would become so rare near us, and so quickly. In 2018, 70 years after the Universal Declaration of Human Rights, 85 years after the birth of the Republic of Turkey, this prize for freedom of expression goes to a citizen of Istanbul, a free spirit and an outstanding artist,” says Swiss cartoonist Chappatte, Vice-President of the Foundation.

“Musa Kart is a witness but above all a victim of the deterioration of freedom of expression in Turkey and faces a long prison sentence for his drawings critical of the government. Turkey is no exception and the list is long of countries where press professionals risk their lives and their freedom to witness the reality that surrounds them and inform the world,” adds Plantu, French cartoonist of the daily Le Monde, founder of Cartooning for Peace. .

This fourth edition is marked by a video recording of Musa Kart, who cannot go to Geneva but would like to say a few words that resonate well beyond the walls of the Swiss Press Club, which broadcasts the conference live. The conference continues with a rich discussion between Human Rights Watch Executive Director Kenneth Roth and Mana Neyestani, an Iranian cartoonist in exile and laureate of the Prize in 2012.

Read the statement of General director of the UN office in Geneva here (in French then in English).

Watch the conference in its integrality here.