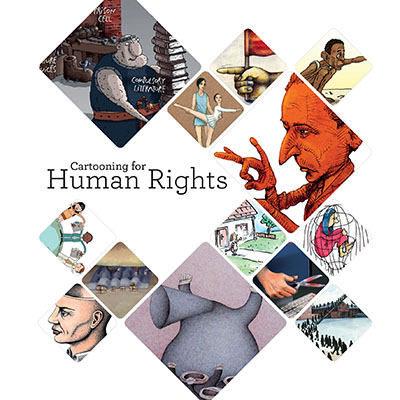 As stated in the Universal Declaration of Human Rights ” […] recognition of inherent dignity and of the equal and inalienable rights of all members of the human family is the foundation of freedom, justice and peace in the world”. Human rights are indeed instrumental in attaining sustainable development.

The NGO Cartooning for Peace, invested since ten years in the promotion of human rights, decided to join the European Commission, DG International Cooperation and Development – Unit B.1 Human Rights, Gender, Democratic Governance to organise a series of events between the 15th and the 16th December 2015 at the European Parliament in Strasbourg (France).

On program: “Cartooning for Human Rights” exhibition, debates and conferences about Freedom of Speech, “Caricaturists – Footsoldiers of Democracy” screening and drawing live in support to Raif Badawi during the Sakharov Prize Ceremony on December 16.

The Cartooning for Human Rights exhibition was initially displayed inside the European Parliament in December 2015 and is presented to a largest audience at the University of Strasbourg until January, 30 2016.

Gallery of cartoons drawn in support to Raif Badawi

Have a look at the exhibition catalogue online