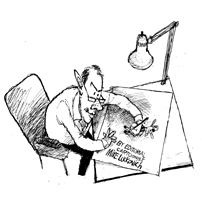 Mike Luckovich published his first drawing in 1984 in The Greenville News and works as an editorial cartoonist for the New Orleans Times-Picayune. Since 1989 he has published in The Atlanta Journal-Constitution, News Week and The New York Times. In 2006, he received two of the most prestigious prizes: the Pulitzer Press Cartoon Prize and the Reuben. One of his cartoons which asked whether Michael Jackson went to heaven or hell after the death of the star sparked a major controversy.