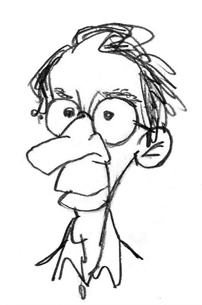 Born in 1947, Carsten Graabæk lives and works in Aarhus. The cartoon strip that made him famous, Statsministeren (The Prime Minister), was created in 1982 and syndicated in Scandinavia. It cleverly mocks the ineptitude of leaders in European democracies. In 1990, Denmark’s then Prime Minister Poul Schlüter presented Graabæk with the Danish comic award, the Ping Prize.

In October 2005, the Danish newspaper Jyllands-Posten invited him to do a Mohammed cartoon, but he wisely declined. Highly critical of religion, Graabaek does not spare the Pope nor the Vatican.