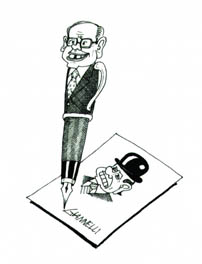 A lawyer by profession, Emilio Giannelli began his career as a cartoonist at the age of 44. In 1980, he contributed to Satyricon, the satirical insert of the daily newspaper La Repubblica. He produces daily illustrations for the headlines in Il Corriere della Sera and his cartoons also appear in the weekly Panorama and L’Espresso. He has also published several collections of cartoons and received several awards as a cartoonist, journalist and political satirist.