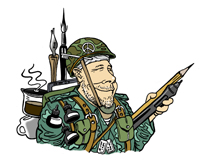 Ed Hall has spent the last twenty years building a reputation as an editorial cartoonist with bite. He graduated from The University of Florida in 1986 with a Masters degree in Fine Art. While in college he did cartoons and illustrations for The Alligator, UF’s school newspaper.

After college, Ed Hall worked for several weekly publications in and around Jacksonville, and finally settled at The Baker County Press in Macclenny, Florida where he continues to work as the weekly cartoonist. Over the last 11 years, Hall has won 9 Florida Press Association Awards, 3 Newsmaker Awards, and numerous fine art awards. In 2003, Ed was presented the53rd Annual Green Eyeshade Award for weekly cartoons by The Society of Professional Journalists.

Ed has also three times received the prestigious Excellence in Journalism Award from The Florida Press Club. Hall has published two collections of his cartoons. The first “Code Red,” released in 2003, was widely praised for it’s originality and breadth. In 2006, he published his second volume, entitled “Diversions.”

Ed’s work is distributed through Artizans, a Canadian Syndicate, and has been featured in several European publications including Der Spiegel, and The New Internationalist Magazine.