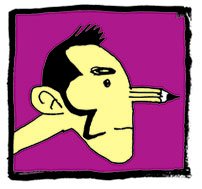 Antonio Jorge Gonçalves is a Portuguese Cartoonist. He graduated in Graphic Design at the Faculty of Fine Arts of Lisbon and in Theatre Design at the Slade School of Fine Art in London. His political cartoons (awarded several times at World Press Cartoon) appear on Publico newspaper every week since 2003. Author of many graphic novels, his work has been published and exhibited various countries.

Antonio Gonçalves also created the SUBWAY LIFE project, drawing people sitting on subway trains around the world. The project became an awarded website, a book, and a touring exhibition.