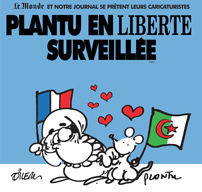 Cartooning for Peace takes part in the Editorial cartoons Biennale organized by the Bibliothèque Nationale de France (National Library of France) since 2010. The three editions (2010, 2012, 2014) enabled the cartoonists to present uncommon selections of cartoons and animate debates with the audience.

During 2012 edition, the cartoonists Louison, Mykaïa and Tignous also presented a retrospective of the exchange between Plantu and Dilem (Le Monde – Liberté) in reference to the exhibition « France-Algeria, editorial cartoons » which was displayed at the BNF at the same period.