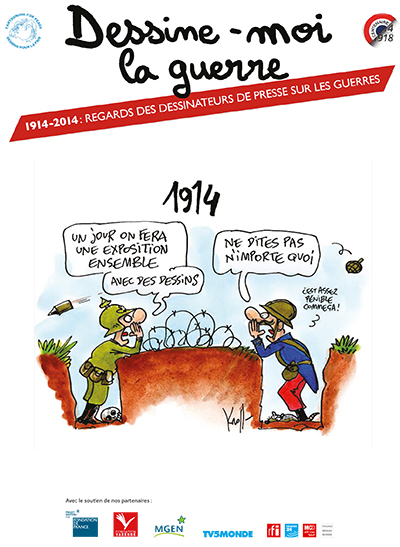 Cartoonists have always sketched the news in a humourous and critical way, even when it comes to tragic events, such as the First World War -which started a century ago.

In order to get involved in this sad commemoration and to fulfill our duty of remembrance, Cartooning for Peace has organised an exhibition. Thus, the exhibition Draw me the war – 1914-2014: cartoonists’ views on wars, which has been presented within the framework of celebrations organised by the First World War Centenary Partnership Program, seeks to create a dialogue between the Great War cartoonists and current cartoonists. Their cartoons show us both the specificity of every conflict and the common features of 20th and 21st-century wars.

The lauch event inaugurating the exhibition took place at the Théâtre du Rond-Point on the 16th of March. The lauch of the exhibition Draw me the war – 1914-2014: cartoonists’ views on wars resulted in an opportunity for several guests to discuss on the depiction of war through cartoons. The discussion included the cartoonists Plantu and Kroll, as well as the art historian Bertrand Tillier and the head of the newspaper Le 1, Eric Fottorino.

The exhibition is made of 10 kakemonos that can be rolled up and rolled out and it goes with an educational kit for pupils as well as a guide for teachers.

To get more information about the exhibition, you may get in touch with Chloé Landereau:chloe@cartooningforpeace.org