Cartooning for Peace, partner of the “Cartoons for Freedom” Exhibition 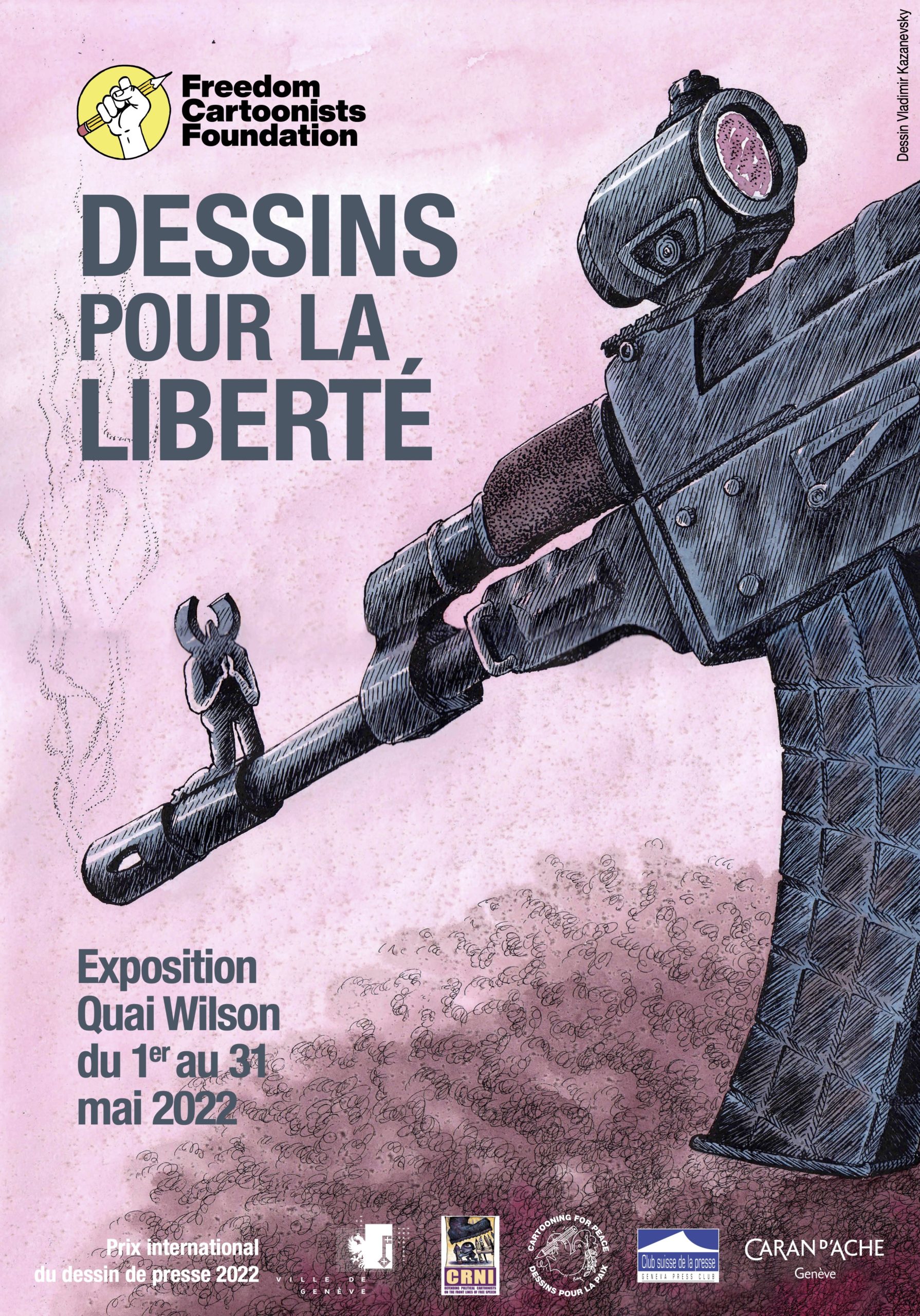 On the occasion of World Press Freedom Day, Cartooning for Peace is pleased to partner with the Freedom Cartoonists Foundation for the exhibition “Cartoons for Freedom” presented from May 1 to 31, 2022 on the Quai Wilson in Geneva.

The exhibition features 60 press cartoons from around the world on three main themes: the war in Europe, life during the Covid-19 pandemic  and global warming.

On May 3, World Press Freedom Day, The Freedom Cartoonists Foundation presented the Kofi Annan Courage in Cartooning 2022 Award, to Vladimir Kazanevsky (Ukraine) and Gábor Papaí (Hungary), in partnership with Cartoonists Rights Network International (CRNI) and Cartooning for Peace. The prizes were given by Dmitry Muratov and Maria Ressa, 2021 Nobel Peace Prizes.

Vladimir Kazanevsky, Ukraine’s leading cartoonist, was working in his studio early in the morning of 24 February when he heard loud explosions near the airport. He and his wife quickly found themselves in Western

Ukraine, along with a huge wave of families fleeing the bombings. They decided to cross the Polish border to Presov, a town in Slovakia with a community of artists.

Deprived of his drawing materials, catalogues and books, which he had to leave behind in Kiev, Vladimir Kazanevsky continues to draw relentlessly: Putin in action, on a tank or on the bow of the Titanic. “Autocrats and dictators are afraid of our cartoons, and they are right, because our drawings are powerful weapons,” he says.

Fiercely determined to continue the fight against Russian aggression, the 71-year-old sees his work as an act of resistance. An act of defence of freedom of expression against war propaganda.

For several years, Hungarian cartoonist Gábor Pápai and his newspaper Népszava – the only opposition daily still alive in Budapest – have been the subject of attacks and legal proceedings by the authorities – even though Hungary is part of the European Union!

The Catholic religion, the fight against covid or simply Hungarian history are all pretexts for prosecution in a country ranked 92nd in the world press freedom index by Reporters Without Borders (RSF). This shameful ranking has been deteriorating ever since Viktor Orbán became Prime Minister, putting all independent media in great difficulty. Some, like Népszava, are directly threatened with extinction. Gábor Pápai, far from being intimidated, continues to critically observe and draw all political actors in Hungary.

The jury for the Award is composed of: