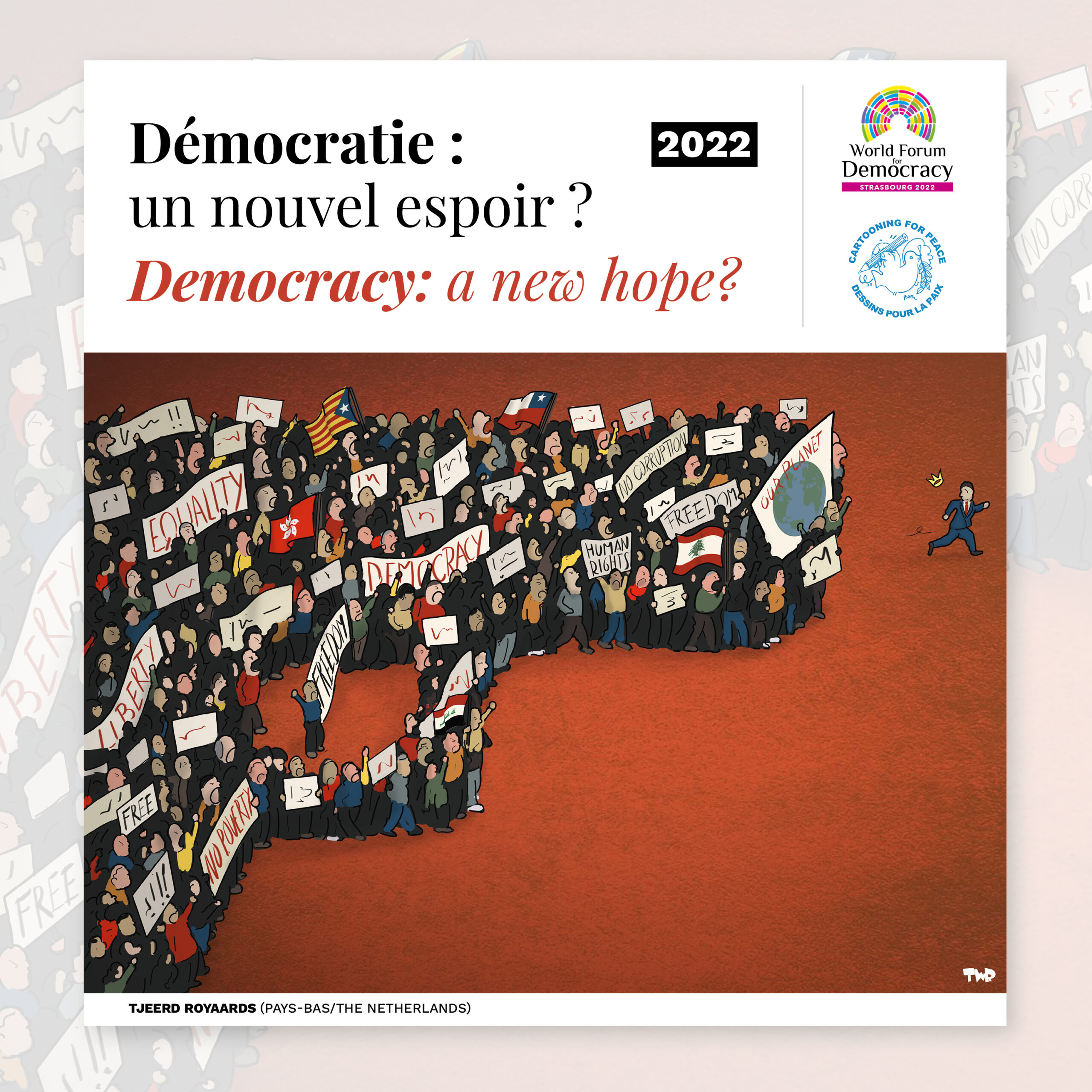 The World Forum for Democracy celebrates its tenth anniversary in 2022. Ten years of existence in the service of democracy, a common good acquired over a long period of time and yet today weakened, everywhere in the world. As well as the climate emergency, we also face the democracy emergency.

The World Forum for Democracy warns: “Those who believe that democracy is the best way to govern – and those who do not – know that democracy is in distress. Many wonder whether it will survive. Others are determined that democratic decline is neither inevitable nor irreversible. The 10th World Forum for Democracy intends to get to the heart of what has gone wrong. It will look at the main factors contributing to democratic decline, examine what can be done about it, and consider what kind of democratic future is desirable – and possible – for people around the world.

Press cartoons are an essential component of democratic culture and debate. Cartooning for Peace, a loyal partner of the Forum, which places the fundamental values of human rights and democracy at the heart of its actions, is mobilising for this tenth anniversary:

5th of November: meet and greet with the Afghan press cartoonist Khaliq Alizada in Aubette

As every year, throughout the month of November, the City of Strasbourg, the Council of Europe, the Grand Est Region, the European collectivity ofAlsace and the French State invite the citizens of Strasbourg to debate and exchange views on the challenges faced by contemporary democracies.

On Saturday 5 November, as part of the meeting “Committing oneself for democracy!” which will be held at the Aubette from 5.15pm to 6.45pm, the Afghan press cartoonist Khaliq Alizada will give a testimony about his experience: forced to flee his country as soon as the Taliban returned to Kabul, Khaliq Alizada has since lived in France as a political refugee.

7-9th November: exhibition « Democracy: a new hope? » at the Council of Europe

Cartooning for Peace has specially designed the exhibition “Democracy: a new hope?” illustrated with press cartoons from all over the world and presented at the Council of Europe from 7 to 9 November, it offers a retrospective of the major themes addressed over the years by the Forum.

The cartoons in the exhibition will also be projected in the Council of Europe hemicycle and disseminated on social networks during the Forum.