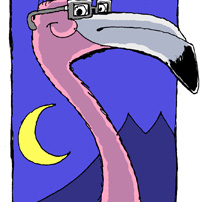 Z was born in Tunis, in 1979. Architect by day, cyberactivist by night, he became famous through his blog debatunisie.com, in which he comments on the news and Tunisian political life. The use of a pseudonym allowed him to harshly criticize Ben Ali’s regime. In 2009, blogger Fatma Riahi was arrested by the Tunisian authorities, accused of being Z.

The revolution opened doors to Z, who published his first book in Tunisia and cartoons in the foreign press (Le Monde, The Economist, Liberation…).

Z still works as an anonymous author and continues to publish regularly on his blog.