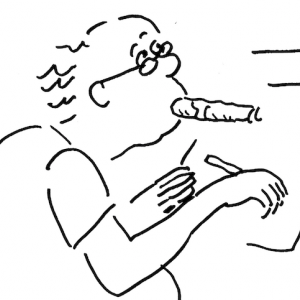 Georges Wolinski is a French press cartoonist, born in 1934 in Tunis. When he came back from the Algerian war in 1960, he joined François Cavanna, Reiser, Cabu to create the satirical magazine Hara-Kiri.

He started drawing political cartoons with Siné in the newspaper L’Enragé. He also wrote the theatre script: “Je ne veux pas mourir idiot” (I don’t want to die dumb). Since the 80’s, he collaborated with a lot of medias such as L’Humanité, Libération, Le Nouvel Observateur, Paris-Match, Hara-Kiri – which is now Charlie Hebdo – and le Journal du Dimanche.

He is laureate in 1998 of the International humour price in Spain and won the Great Price of the 32nd Angouleme festival in 2005. In the same year, he makes it into the Larousse French dictionary and he receives the Légion d’Honneur of France. Georges Wolinski was murdered on the 7th of January 2015 during the terrorist attack against Charlie Hebdo, the newspaper he helped found.