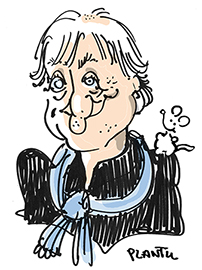 Plantu published his first cartoon on Vietnam War in the newspaper Le Monde in October 1972. His drawings were regularly published in the headlines since 1985.
From 1980 to 1986, he also worked for the magazine Phosphore and since 1991 he has been publishing a weekly page in the magazine L’Express. On the same year, he won the « Rare Document Award » at the Angers Festival du Scoop for managing to append both signatures of Yasser Arafat and Shimon Peres on the same drawing, a year before the Oslo Accords.
In 2006, Plantu and former Secretary General of the United Nations, Kofi Annan (Nobel Peace Prize in 2001) organized a symposium in New York, in which Cartooning for Peace was formed. This network, with its association in Paris and foundation in Geneva, promotes freedom of expression for cartoonists around the world and counts already 147 members. Plantu has published more than 60 books of his press cartoon collection (Le Monde editions, Le Seuil).