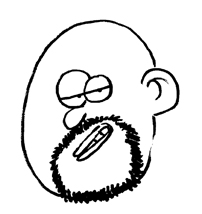 Pahé has been editorial cartoonist for TV+, a private television channel, for many years. He says that actually he can’t work anymore for a newspaper: on his opinion, there are no longer independent newspapers in Gabon. In 2009, he was jailed for 36 hours for a cartoon about two policemen, in uniform, drinking alcohol: this cartoon is available online on his blog. Pahé, who divides his time between his hometown in Bitam (North) and Paris, is the author of several books, including compilations of cartoons, comic strips and a caricature book.