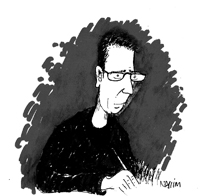 Nacim Benmammar was born in Algeria in 1977. He is a graduate in international relations and works as a journalist and cartoonist. He published his first political cartoon in Le Soir d’Algérie in 1997. In 1998 he worked as a cartoonist and illustrator at the Jeune Indépendant and Algérie Hebdo. He has been working since 2002 with Courrier International, Le Monde, La Dépêche du Midi and Ouest France. In 2006, he won the prize Crayons de Porcelaine, Foreign Press at the international fair in Saint Just Le Martel.