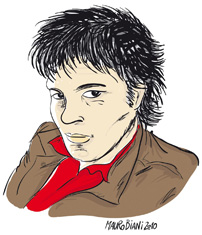 Mauro Biani is an Italian illustrator and cartoonist, specialized in social and political satire. He is a cartoonist for Il Manifesto and he collaborates with Polisblog.it, Courrier International, i Siciliani, Azione nonviolenta, Il Fatto quotidiano. He worked as freelancer for several magazines and newspapers, such as Liberazione, L’Unita. His animated cartoons are published on his blog and many other Italian sites.

In 2007, he received the Forte dei Marmi, awarded to the best Italian satirists. He also received in 2013 at Sansepolcro the Non-Violence National Prize.