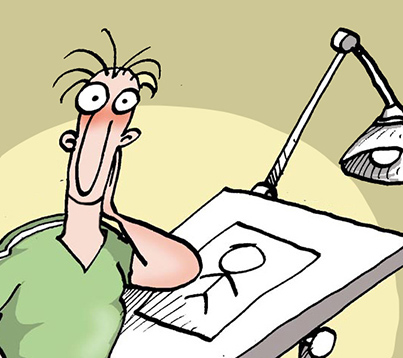 Alfredo Martirena Hernandez was born in 1965 in Santa Clara, in Cuba. In 1984 he began to work in the humorous weekly publication Melaito. In 1986, he won the great prize of the competition « 25 años de humor en Palente » (25 Years of Humor in Palente). In 1987, he published his first personal book, From ear to ear. He also participated in 10 collective books, such as the book published in Italy Fumetty a Cuba that picked up the work of 20 contemporary Cuban cartoonists.

Since he began to work as a cartoonist he has collaborated with different national publications: Juventud Rebelde newspaper, Bohemian magazine; weekly publication Palante, “Tribuna de la Habana”, “Alma mater”, “Habanera”, among others.  He also has been working with international publications such as the Diariomonitor and Chocarreros from Mexico; “El Jueves”,”Monografico.net”, “Batracio Amarillo” y “Periódico Diagonal” from Spain; the “Nuevo Diario” from Nicaragua, and Witty World from the USA.

In 2000, he exposed 40 of his cartoons in Switzerland, invited by the gallery Impuls.

He also published the book Humor in vitro, with the Spanish editorial “El Batracio”, and he illustrated books for children such as Hola caracola and El Pulpo ataulfo.