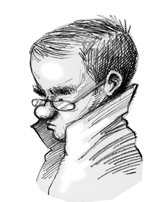 Born in Tehran, Iran in 1973, Mana Neyestani trained as an architect in Tehran University, but began his carrer in 1990 as a cartoonist and illustrator for many cultural, political, literary and economic magazine. With the rise of Iranian reformist newspapers in 1999, he became an editorial cartoonist. In 2006, he was sent to jail because of a cartoon. Neyestani is now living in Paris, as a member of ICORN (the International Cities of Refuge Network).