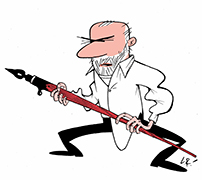 Lars Refn is an editorial Danish cartoonist who was born in Valby, a suburb of Copenhagen. In 1980, he graduated from the Skolen for Brugskunst, the School of Arts and Crafts of Copenhagen.

Lars Refn is a prolific caricaturist, fond of political satire, who has led his career as a cartoonist since 1980 and has worked for numerous newspapers, magazines and digital media. He is very interested by the relations between humans and technologies.

Lars Refn is also the chief editor of the satirical website caricature.dk and works for the magazine SPOT. From 2013 to 2019, he has been the President of Danske Bladtegnere, the Danish editorial cartoonists federation.

He currently works for Zebra Pressebureau, a press agency based in Copenhagen.