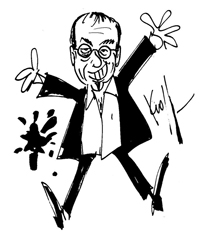 Pierre Kroll was born in 1958 in Congo. An architect and graduate in Environmental Sciences, he became a freelance draftsman in 1985.

Since then, his drawings can be found in countless periodicals and publications. Today he is the regular cartoonist for the Belgian daily Le Soir and the weekly Ciné-Télé-Revue. He also draws live every Wednesday evening on RTBF in the programme À votre avis, the weekly political debate. For the past 25 years, he has published an annual collection of his best drawings, published by Les Arènes.

In 2015, he adds a new string to his bow: the stage. He tours in the biggest Belgian theatres (and even in Paris and Kinshasa) with his first show in which he tries to explain with humour the stakes of his profession.