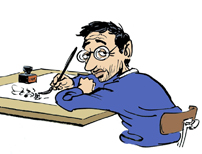 Michel Kichka is one of the most famous Israeli caricaturists. He was born in 1954 in Belgium.

He drops his studies in architecture in Belgium to settle in Israel where he studies graphics from 1974 to 1978. Since then, he has worked as an illustrator, a comic book artist and a cartoonist. He works as an editorial cartoonist for Israeli TV channels (Channel 2, Channel 1, i24news) and French TV (TV5Monde) and he draws frequently for Courrier International and Regards (Belgium). He has been also a teacher at the Beaux-Arts of Jerusalem since 1982.

He is the former president of the Association of Israeli cartoonists and he worked as a scientific adviser for the Israeli comic books and caricatures Museum which organized a retrospective on Kichka’s work. He was awarded the Israeli Prize « Dosh Cartoonist Award » in 2008 and the French government has made him a Knight of Arts and Letters in 2011.

He released Second generation – What I didn’t tell my father (Dargaud), a comic about his relations with his father who was a concentration-camp survivor.