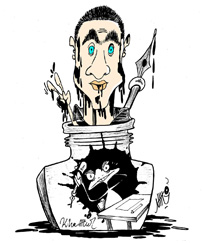 His love of freedom of the press earned the Moroccan cartoonist, Khalid Gueddar, a three-year suspended prison sentence in February 2010 for having portrayed a member of the royal family on Bakchich. It also resulted in his dismissal from the Moroccan daily All Masse then the daily Akhabar al youm. Khalid nevertheless continues relentlessly to lambast the news with great strokes of his pencil mainly in Al Asr, Demain Magazine, Le Journal Hebdo, the Gri-Gri International and occasionally in Courrier International and El Mundo.