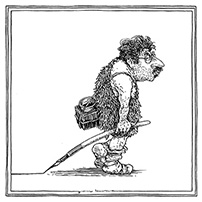 Joep Bertrams (born in 1946) is a Dutch cartoonist. After being for the past twenty years a caricaturist at the daily newspaper of Amsterdam Het Parool, he joined the weekly newspaper De Groene Amsterdammer in 2011.

Meanwhile, his editorial cartoons have been published in several newspapers abroad.