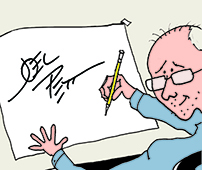 Joel Pett is an American cartoonist, born in Bloomington, Indiana, 1953. He lived in Nigeria from 1959 to 1964 and travelled in over thirty countries all over the world. Freelanced cartoonist for nine years before, he joined The Lexington Herald-Leader in 1984. From 2002, he works for USA Today.

Joel Pett was awarded Robert F Kennedy Journalism Award in 1999 and the Pulitzer Prize in 2000.

He is also a Board member of Cartoonists Rights Network International.

Have a look at Pett’s cartoons on The Lexington Herald-Leader website !