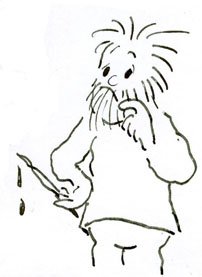 Izel Rozental began to publish his cartoons in the 1970’s in magazines for teenagers.

Since 1991, he has been drawing for the front page of the newspaper Shalom, published in Istanbul. Several of his cartoons have been published in other magazines like the magazine Güldiken since 2001.

Izel has also published five books of humor and eight political cartoons albums. His cartoons are also regularly exhibited in Turkey and abroad.