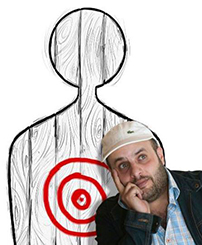 Hani Abbas is a Syrian-Palestinian cartoonist, born in 1977 in the large Palestinian refugee camp of Yarmouk, near Damascus in Syria. In 2012, he posted on Facebook a cartoon showing the flower that symbolizes the Syrian Revolution as immortal. Syrian Secret Services immediately threatened him.

Hani Abbas had to flee Syria and seek for asylum in Switzerland. He is now settled in Switzerland and keeps denouncing Wars’ atrocities in cartoons.

In May 2014, he was awarded the Editorial Cartoon International Prize (Prix International du Dessin de Presse) by Kofi Annan in Geneva.