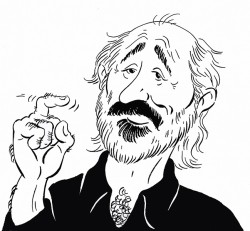 Alain Goutal was born in Bourges on 30 September 1948, the son of a Breton father and a Berry mother. He lives in Brittany.

He has published nearly thirty albums and several books in collaboration with children or adults, following writing and illustration workshops, including recently, Présences, Panier de Crabes, Carabistouilles, Saint Malo and Penses-tu? Pense-tu ! published by YIL, and the KB, by Hervé Bellec, published by DIALOGUES.