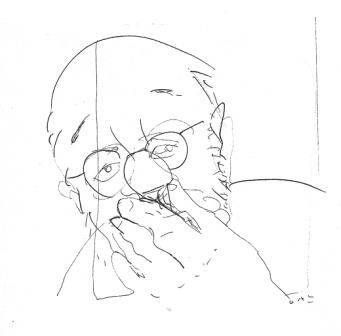 Gerard Alstreens, better known as GAL, is a political cartoonist, graphic artist and painter. The Oudergem native from Belgium studied painting and graphic art at the higher Saint-Luc institute in Brussels. His first cartoons were published in 1960, since when he has been working with different newspapers. He draws for the magazine Knack since 1984. GAL lost his eyesight due to an embolism. After a while he discovered a handy method to continue his work.

He participated to many public demonstrations and devoted his talent to many political and social causes, including Oxfam and Amnesty International. He has illustrated novels by Kristen Hemmeretchs and Geert Van Instendael, as well as illustration the album cover of Zjef Vanuystel. GAL has won many awards and international distinctions.