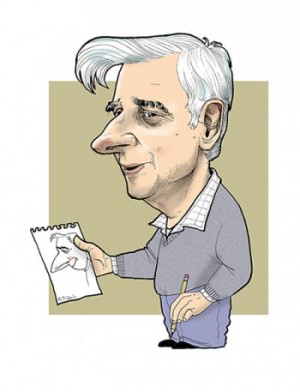 Born in Mexico in 1956, Rafael Barajas Durán alias El Fisgón is an architect from the National Autonomous University of Mexico. He is also a cartoonist at the Mexican newspaper La Jornada, writer, political activist and illustrator for children’s books. His cartoons were regularly published in the daily Unomásuno, from 1981 to 1984, and in La Jornada with his “Adventures of the sergeant Mike Goodness” from 1985 to 1987. He was founder, director and collaborator of the political humour magazine El Chahuistle from 1994 to 1997 and of its successor El Chamuco y los hijos del Averno, from 1997 to 2000 and until 2007.

He received the Guggenheim grant from 2002 to 2003 and dedicated himself to free speech through caricature in Mexico. In 2000, the National Council for the Culture and the Arts published his book La historia de un país en caricatura (“The story of a country in cartoons”).

He wrote many books and essays about the history of art and the caricature such as Un país que no conoce su rostro está condenado a la caricatura (“A country that does not know his face is condemned to caricature”) in 1995. With some university networks, he created circles of study in 2006, in order to generate thinking and political preparation for citizens and for the youth. Today, there are circles of study all over Mexico.

He won the Young Journalism Manuel Buendía Prize in 1987, the « Constantino Escalante » Prize from the Journalists Club in 1996, the National Journalism of Mexico Award in 1999, and the La Catrina award, at the International Book Fair in 2010.