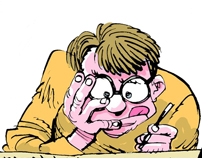 For the past 35 years, Daryl Cagle has been one of America’s most prolific cartoonists. He worked for 15 years with Jim Henson’s Muppets, illustrating scores of books, magazines and all manner of products.

Daryl worked for many years as an advertising illustrator, doing cartoon campaigns for various firms. Daryl drew a comic called “True!” in the 1990′s for Tribune Media Services. He worked as the editorial cartoonist in Hawaii and then drew for the Washington Post’s Slate.com site before ending up as the cartoonist for MSNBC.com. Daryl now works for himself and has no editor at all.

In 2001, Daryl started a new syndicate, Cagle Cartoons, Inc., which distributes the cartoons of sixty editorial cartoonists to more than 850 newspapers in the United States, Canada, and Latin America.