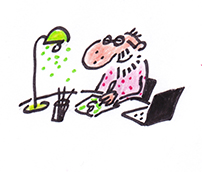 Chimulus is the pseudonym of Michel Faizant, a French editorial cartoonist, born in 1946.

He is the son of famous cartoonist Jacques Faizant.

Chimulus started his career drawing cartoons about the French President Georges Pompidou for the JDD. His cartoons were published in Elle with Dubouillon and Mordillo’s cartoons.  He also worked for Paris Match, Tele 7 jours, Marianne, TV Magazine, Press-Ocean, La Tribune and Siné Hebdo.

Chimulus published his daily cartoons on Nouvel Obs website and he was also a regular contributor to Siné Mensuel and the satirical website « Urtikan.net ».